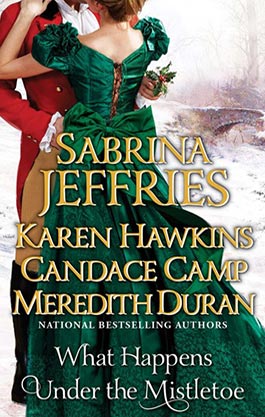 Stunned by the heat of an unexpected kiss on a cold winter’s eve, two strangers from vastly different worlds turn hotheaded principles into burning passion in Sabrina Jeffries’s delightful yuletide story, The Heiress and the Hothead. In the snowy Scottish countryside, Karen Hawkins’s rakish duke has an unforgettable holiday encounter in Twelve Kisses when the alluring lady he surprises under the mistletoe is not who he expected, but a long-lost love with a score to settle. In By Any Other Name, Edinburgh is aglitter for Christmastime as Candace Camp sends a curious gentleman in hot pursuit of an intriguing lady in disguise—one who refuses to reveal her true identity, though she fears he has already stolen her heart with his kiss. In Sweet Ruin, will the festive spirit of the season sweep Meredith Duran’s feisty heroine beneath the mistletoe—and back into the arms of the dashing rogue whose carelessness soiled her reputation and sent her into exile in London?

In this all-new story collection sparkling with sexy charm and heartwarming wit, four beloved bestselling authors reveal the mix-ups and make-ups, the missed chances and golden opportunities that come but once a year.

Lord Rothesay scowled. “You tricked me into that kiss!”

Kenna's face heated. “I’ve admitted as much. It was a stupid thing to do. I—I just wanted to see if we—if the kiss would feel the same.”

He stalked closer until his toes touched hers, both on the line, his face inches from hers, the heat from his body warming hers. “We never had issues with that part of our relationship, Kenna. Never. Every time you touched me, I flickered to life. And it was the same for you. It still is. We never lacked in passion. What we lacked was trust.”

Every word he said puffed his warm breath over her cheeks, her lashes. She could feel the heat emanating from him, smell the freshness of his cologne, almost taste his lips as she had only a few days ago. She had to swallow before she could speak, her voice husky even to her own ears. “We missed one more thing, Marcus. We had no bravery, no relish for taking chances. We wanted security, safety, promises that would never be broken. No one can honestly promise they will love someone forever, that they will never change no matter what happens in their lives, that they will – without fail – always feel the same about the other person as they feel right this second. Those are lies. Real love happens when you make that decision every day, day after day, to spend the next twenty-four hours with the person beside you. And then, when the day ends and the new one dawns, you make that same decision again … and again … and again. Until suddenly, one day, you realize you did love that person and it did last forever."

He was silent a long, long time, his dark eyes flickering over her face, lingering on her lips. "Perhaps. So do you think we're braver now?"

She suddenly found it hard to breathe, but she met his gaze steadily, her body yearning to lean into him. "I am. Are you?"