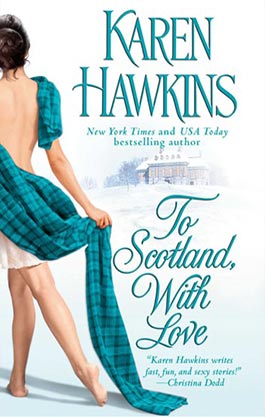 When Lord Gregor MacLean learns his childhood friend, Venetia Oglivie, has been abducted by a fortune hunter, he rides off to Scotland in hot—and very annoyed—pursuit. Venetia’s soft heart has gotten her in major trouble this time: if he doesn’t rescue her swiftly, the scandal will ostracize the provocative wench!

The only sensible member of her family, Venetia is sure she can fix any problem, even this one. So when an irate Gregor catches up to her, arrogantly expecting a hero’s welcome, the sparks between them begin to fly. Then an unexpected snowstorm traps them at an inn, and Gregor discovers his feelings for the lovely Venetia are far warmer than he realized—fiery enough to burn down the inn! Now if he can only convince Venetia that his motive for marriage isn’t duty…but desire.

"Great story! I really enjoy this series and I am glad that I have the rest of the books to read…"

~ Once Upon A Twilight

"To Scotland, With Love was entertaining from beginning to end."

"I loved this one…childhood friends finally looking at each other as objects of desire instead of just best friends, and some really delicious sexual tension make this one a delightful 4/5".

Her face hot, Venetia twisted her hand free and quickly stepped out of reach. “Do not say such a thing!”

Ravenscroft remained on the floor, his arms out-stretched. “But I must, for I love you. I even eloped with you!”

“Had I known this was an elopement, you would be alone!”

“But you have always been so nice to me!”

“I am nice to everyone. Ravenscroft, I am going to say this as plainly as I can. I don’t love you, and I will never marry you. Not now. Not ever.”

Ravenscroft dropped his arms to his sides. “You must marry me. You are with me. Alone. In an inn. You are ruined.”

“I don’t see why…” Her voice trailed off as realization sank into her stomach with cold surety. If word of this reached London, she would indeed ne ruined. Blast it, she that was unfair! She enjoyed London society and its amusements immensely. Not, they might be gone forever.

Suddenly, the events of the day seemed too much. She whirled away and went to stand at the window, her mind in turmoil. Perhaps she could return to London before anyone realized she was gone. But how? Only a madwoman would travel alone in such weather.

What a horrid coil! She was stuck. Completely stuck. How she wished Gregor were there. Whatever else he might be, he had a good head on his shoulders, and he never panicked or grew emotional.

For a wild instant, she imagined that the thick snow parted to reveal a tall, black-haired man on a white horse, his multicaped coat dusted with snow, his curly-brimmed beaver hat shading his green eyes from the wild and cold.

The image faded; Venetia stared morosely out into the snow.

“We must come up with some sort of plan,” Ravenscroft announced in a loud, petulant voice.

She didn’t turn to look at him but was certain he was attempting to appear senatorial. She bit back a frustrated sigh. Really, he was too much like her father, full of useless emotion, not a drop of common sense in his body.

“Venetia,” he said dramatically. “We—“

“Miss Oglivie.” She paused. “Actually, you should call me Miss West.”

“Won’t everyone think that odd if I’m your brother?”

She sighed. He was right. She was going to have to allow him that familiarity, at least. “Oh, blast you, very well.”

“Venetia!” he said triumphantly. “Allow me to assure you I plan on making this right, whatever it takes.”

Venetia closed her eyes against a sharp comment and began counting to ten.

Something in his voice cut through her irritation, and she opened her eyes to see a most welcome sight through the window.

Climbing down off a large bay, his coat and hat powdered with snow, his face set in stern lines that only made him appear more handsome, was the man of her imagination, though he was as real as her own heart that now thudded against her throat.  She wasn’t certain how she knew, but she did; Gregor MacLean had come to save the day.