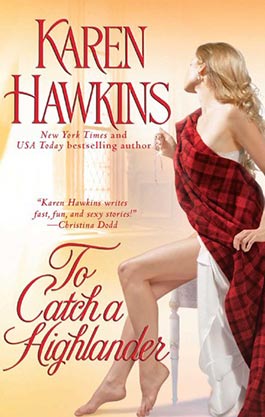 When her father gambles away the family estate to darkly dangerous Lord Dougal MacLean, Sophia MacFarlane is determined to use her wiles to regain it. Forced to stake the one thing she has left—her virtue—she desperately hopes her skill can  limit her losses to a few kisses…no matter how hotly tempting Dougal turns out to be.

Dougal MacLean knows that Sophia has some trick up her sleeve, but he can’t resist the challenge—or her ravishing beauty. SO when she proposes a card game with most unusual stakes, Dougal is delighted to accept. But as the game ends, Dougal and Sophia discover they’ve wagered something even more precious—their hearts.

"Love and laughter, poignancy and emotional intensity, endearing characters and a charming plot are the ingredients in Hawkins' utterly delightful tale."

"After reading this wonderful battle of the sexes' tale, fans will revise how they look at games of chance as sometimes a win-win is possible."

"Karen Hawkins has done it again, providing a fresh take on a classic story, of how the rake is deceived, played, tamed and loved, while giving a reader everything they could ever want: a touch of magic *the family curse*, a beautiful setting, lush details, warm moments and passionate ones. Don't miss this delectable series!"

Sophia turned to the small table and opened a drawer, removing a deck of cards, the evening light caressing her cheek. “This will be just the thing to keep my mind off my troubles. “

Dougal crossed to join her at the table. “Excellent. I never turn from a game, myself.” He set down his sherry and pulled back a chair for her, waiting until she seated herself before he took the chair opposite hers.

She watched him from beneath her lashes, noting his athletic grace and the way the lace at his cuffs dropped over his masculine hands with such effect.

Idly, she shuffled the deck, her fingers moving nimbly over the cards.

Dougal found himself watching her hands, the way her slender fingers caressed the cards. He thought of those fingers caressing him, sliding over his—

His name slid through her lips like velvet over bared skin. His heart thundered in his ears; his body tightened. “Yes?”

Her eyes, so pale and yet so bright, met his. “I was wondering…” The sound of the cards flipping through her lissome fingers filled the quiet.

“Did you bring money with you, or shall we play for markers?” She flipped the stack of cards to the table with a professional twist of her wrist. “I don’t play for less than a guinea a hand.”

“I don’t need funds, as I don’t plan on losing,” she said, her gaze mocking.

For a moment, he thought he’d heard her incorrectly. Slowly, he said, “I beg your pardon, but are you saying you could beat me at a game of chance?”

A dismissive smile rested on her lips. “Please, Dougal, let’s speak frankly,” she drawled softly. “Naturally I expect to win; I was taught by a master.”

Dougal was entranced. He’d been challenged to many things before, but no one had so blatantly dismissed his chances of winning.” A guinea a hand?”

“I didn’t realize I’d need a note from my banker, or I’d have brought one with me.”

Her eyes sparkled with pure mischief, which inflamed him more. “No funds? Hm. Perhaps there are other things we can play for, then.”

His gaze slid over her, resting on her plump bottom lip, and the pleasing curve of her shoulders. He was suddenly very certain that there were many, many things they could play for, almost too many to count.