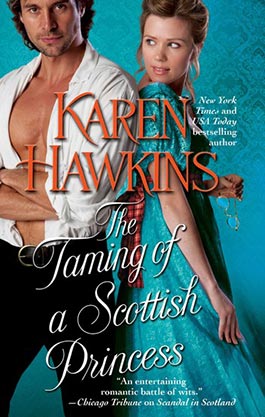 The fourth book in the Hurst Amulet Series

When famed Egyptologist Michael Hurst discovers that the infamous Hurst Amulet is hidden in Scotland, he insists his trusted assistant, Miss Jane Smythe-Haughton, accompany him north. Strangely, the usually unflappable Jane seems perturbed by their destination—the mysterious Isle of Barra. A fascinated Michael watches as his staid assistant transforms, revealing intriguing layers of mystery and vulnerability. Could he be about to uncover not one, but two, precious treasures?

Once her clan’s princess, Jane fled Barra years ago to avoid a forced marriage. Since then, she has made her living as efficient Miss Smythe-Haughton—the perfect (and highly paid) assistant. Now she must confront her secrets . . . including her feelings for her irascible employer, too-handsome-for-his-own-good Michael Hurst.

Others are also searching for the missing amulet, however. Can Jane and Michael learn to trust each other in time to solve two riddles: the location of the Hurst Amulet, and the meaning of the vivid passion flaring between them?

5 out of 5 Stars! "This is the first Karen Hawkins novel I’ve ever read and she is now (and the only historical author) on my auto-buy list. Enough said."

Highest Rating! "(THE TAMING OF A SCOTTISH PRINCESS is) a super climax to an engaging series!"

Top Pick! "(THE TAMING OF A SCOTTISH PRINCESS is) delightfully humorous, poignant and satisfying! A quick-moving, dramatic plot populated with memorable characters, witty and humorous dialogue and sizzling sensuality makes this her best yet – a tale to reread."

A commotion roiled across the ballroom like a hot wind blowing through a field of wheat.

Mary hopped to her feet, lifted on her tiptoes and craned her neck. “Has the King arrived? Blast it, I cannot see a thing. Michael, you’re taller. Look for me, please. Is it the King? They said he might come.”

Michael shrugged, uninterested. “I don’t know. Everyone has turned toward the door and— Ah! It’s not the King at all, but Jane.”

Mary dropped back on her heels and frowned at her brother. “Why would Miss Smythe-Haughton’s arrival cause such a stir? No one knows her, do they?”

Michael had already turned his attention back to his cup of Scotch. “I can’t imagine they would.”

Mary waited, but her brother offered no more. Impatient, she snapped, “Well? Is Miss Smythe-Haughton from London?”

Mary closed her eyes and counted to ten. When Michael had first returned from his imprisonment, she’d been so happy to see him that she’d thought she’d never feel angry or upset with him again. That had lasted less than a week. Her brother was a brilliant explorer and historian. His essays and treatises were prized the world over. He was beyond intelligent in a number of areas.

But his skills in dealing with society had greatly deteriorated from years of living abroad in the wildest and most untamed of circumstances. “Michael, who is Miss Smythe-Haughton? She must be someone to cause such interest.”

Mary leaned this way and that, trying to peer through the crowd. “I can’t imagine people are so excited over Miss Smythe-Haughton’s arrival that—" The crowd parted and Mary was afforded a direct view of her brother’s assistant.

Then she clapped a hand over her eyes and fell back upon the settee with a groan. “Oh, Michael, what have you done?”