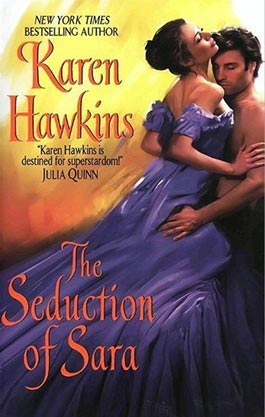 She Needed a Husband

When the Earl of Bridgeton England’s most notorious rake, strides into the ballroom, Lady Sara Carrington immediately plans to lure him onto the terrace. The willful beauty’s brothers want to marry her off to some stodgy old man to curb her wildness, so she’s determined to find her own husband – one who won’t care what she does. Nick is not only indecently handsome and irresistibly charming; he’ll also be absolutely perfect.

He Wanted a Mistress

Never has Nick received a more tantalized proposal—but because of his past, he’s sworn never to marry. Instead, he agrees to give the innocent chit instruction in the art of seduction to help her plan to succeed.

But when “demonstration” kisses become burningly real, and Sara turns the tables by applying her lessons to him, the infamous rake is in danger of falling in love…with the miss he’d only meant to bed!

"This is a battle of the sexes with sparks flying in and out of bed that is sure to delight and will put Karen Hawkins on readers auto-buy lists."

"Regency romance readers will appreciate THE SEDUCTION OF SARA, a battle royale between the sexes."

“We really are at opposing ends of the spectrum, aren’t we?” the earl murmured, his thumb brushing across her cheek, his broad shoulders limned by the light behind him. “I wish for a mistress, not a wife. You wish to be a wife, not a mistress.”

He wanted her. Desired her just as she desired him. Some secret part of Sara leapt at his words and she craved his touch even as she admitted that he was right - they were at cross-purposes. He was not the man she was searching for and she was not the sort of woman he thought.

With the greatest reluctance, she forced her stiff legs to move her away from him, away from the tantalizing scent of male temptation, away from the raw heat that simmered in his gaze.

His hands dropped to his side. “I want you, Sara. And you want me. I can tell.”

To her surprise, he smiled—a masculine, knowing smile, as if he knew her better than she knew herself. “We shall see, my lady. We shall see.”