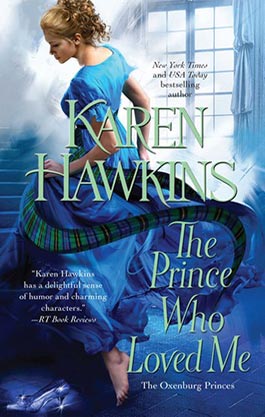 The Oxenburg Princes Series, Book I

Prince Alexsey Romanovin enjoys his carefree life, flirting—and more—with every lovely lady who crosses his path. But when the interfering Duchess Natasha decides it’s time for her grandson to wed, Alexsey finds himself in Scotland, determined to foil her plans. Brainy, bookish, and bespectacled, Bronwyn Murdoch seems the perfect answer—she isn’t at all to the Duchess’s taste.

Living at the beck and call of her ambitious stepmother and social butterfly stepsisters, Bronwyn has little time for a handsome flirt—no matter how intoxicating his kisses are. After all, no spoiled, arrogant prince would be seriously interested in a firm-minded female like herself. So…wouldn’t it be fun to turn his “game” upside down and prove that an ordinary woman can bring a prince to his knees…

A PUBLISHER'S WEEKLY BOOK TO WATCH for September 2014!

"You'll fall in love with the hero prince, want to be best friends with the bookworm heroine, and wish that the rest of the cast (including three adorable dogs) could be a part of your family. A truly warm and funny romance."

"This is the funniest and most satisfying Hawkins book yet! A clever retelling of Cinderella complete with a handsome prince, two social-climbing stepsisters, an ambitious and ruthless stepmother, and (instead of a fairy godmother) a curse-throwing gypsy grandmother!"

With the smallest of efforts he straightened, and suddenly she was in his arms, being carried with what seemed like the greatest of ease.

Alexsey kicked the front door closed behind him. “Where do I take you, little one?”

It was madness and she knew it, but somehow, instead of protesting as she should have been, she found herself pointing toward the sitting room. As he carried her there, she admired the strength of his arms and the width of his chest. If she wished to touch that broad chest, all she had to do was lift her hand.

It was so tempting.

She rested her hand on his chest beside a large gold button, his heart thudding calmly beneath her fingertips. Somehow, she found herself looking up at him through her lashes. “You know what I think?”

He stopped by the settee, his green eyes alight with amusement. “No, but I am certain you will tell me.”

“You shouldn’t be here.”

He chuckled as he placed her on the settee, then set his hat on the small table beside it. “And here I am.”

She pushed herself upright, swinging her feet to the floor. The firmness of the floor and the faint distance between them brought her a tiny breeze of sense. “I’m unchaperoned and I should tell you to go.”

No. Her gaze found his mouth. Never had she met a man with such a sensual bottom lip. Just seeing it made her breath catch, her knees grow weak, her—

“Then I will stay.” Satisfaction warmed his gaze and broke the spell. He unbuttoned his overcoat and shrugged out of it, displaying his elegant dinner coat and a blue embroidered waistcoat. His simple cravat was held by a gold and emerald pin, the fire of which matched his green eyes.

Though his cravat pin sparkled, his eyes captured her attention. His long lashes made him look sleepy and seductive.

He sat beside her on the settee, his thigh aligned with hers. Suddenly the settee seemed very small.

She scooted to one side, but the arm of the settee stopped her. “You are a very big man.”

“And you are a very small woman." He captured her hand and placed a warm, lingering kiss on her fingers. "Like a bird.”

Her entire body warmed as his lips touched her bare skinned, though she found herself frowning at his words. “A bird?”

He looked up at her through his lashes. “A sparrow.”

She shook her head. “I would rather be a hawk.”

He kissed her fingers again, his lips brushing each knuckle. “With me, Roza, you may be anything you wish.”

With him. She liked that. A lot. Her common sense whispered an urgent warning, one she couldn’t quite hear through her haze. “Alexsey, why are you here? Sir Henry's dinner cannot be over for my sisters and mama have not returned.”

“No. It continues. I was tired of so many people, all talking nonsense. So I said I had a headache, left the dinner, and instead came here.” He continued kissing her fingers, his lips warm and inviting, each touch of his lips making her ache. He lifted his gaze to hers. “I couldn’t stay away. You have haunted my thoughts.”

No. I must remain in control if I'm to make him fall wildly, madly in lust with me. Now is the time to woo him, subdue him, make him desire me as no other— She caught sight of herself in the side mirror and gasped. “My hair!” He chuckled as she frantically tried to pat the unruly curls into place. “It’s not funny. I look like a—a—a—I don’t know what, but it’s not— This won’t work at all!”

He tugged her to his chest, tucking her head under his chin. “There. Now you cannot see your hair, but I can feel its softness.” He ran his fingers over her curls. “I like your hair. It is silken.”

“I like it however you wear it.” His lips moved closer to her ear, his voice as deep and rich as honey. “But I especially like it when it looks as if you've been well kissed.”

Her throat tightened and she couldn't speak. She suddenly wondered who was trying to make who fall in lust—and then she remembered they were both doing the exact same thing. Somehow, she hadn’t seen it in that particular way before, and she laughed a little at her surprise.

“What is it?” he asked, his heartbeat warm against her cheek.

“I’m just laughing at us. At you. You are trying to seduce me.”

A dark smile flickered over his face. “Trying? I do not try anything. I do.”

He ran his fingers over her cheek and down to her gray-blue gown. As he did so, a frown entered his gaze. “I do not like that color on you. You will wear reds, Roza. Like the flower you resemble.”

Her smile slipped and she poked him in the chest, emphasizing each word. “Stop. Princing.”

“Princing? What is that?”

“You may be a prince in Oxenburg, but this isn’t your country.”

His lips quirked, but he nodded thoughtfully. “That is what you meant by princing. I suppose I should have asked, nyet?”

“That is exactly what I meant. I won’t take orders from you as if I were a serf.”

He chuckled as if richly amused, and stretched an arm across the back of the settee, turning a bit so that his body encircled her. “My beautiful Roza, we don’t have serfs in Oxenburg. But if we did, you would be a very bad one. Always you argue. Never you do as you are told.”

She opened her mouth to retort that she would make a very good serf, but the absurdity of the idea made her choke on a short laugh. “I’m rather proud of being a bad serf.”

“Which is how it should be.” His gaze swept over her. “I like a woman with pride.”

And she liked that he enjoyed her, unfettered and uncensored. That he didn’t mind if she poked him in the chest while making a point, or that her hair was uncombed and her gown wrinkled. . . . She liked a lot about this man. Too much.

“Oh, my Roza.” His arms slipped about her and he tipped up her face to his. “Has anyone ever told you that you think too much?”

She nodded. “Everyone who knows me.”

“They are right. Fortunately, I know how to handle a woman who thinks too much.”

His mouth descended over hers, passionate and hot. Every last thought she possessed fled, washed away by a flash of passion.