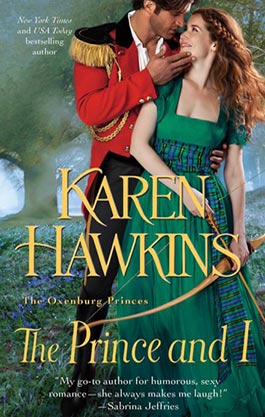 Max Romanovin, Oxenburg’s warrior prince, is escorting his grandmother to a house party deep in the Highlands when he and his entourage are robbed at sword point by a group of ruffians led by a man the locals have dubbed “The Scottish Robin Hood.” The battle-savvy prince instantly realizes there’s something different about this thief, and it’s not just the Scottish accent— it’s the fact that “he” is really a “she.”

Lady Murian, a young widow out for revenge against the powerful earl who killed her husband and stole his birthright, is now living in the woods with her family’s banished retainers. To stay alive, she and her band of men rob rich nobles coming to visit the evil earl. But when she ambushes the Prince of Oxenburg’s golden coach, she gets far more than she expected. For when the prince uncovers her true identity, she’s afraid that he might be the real thief…of her heart.

"Swashbuckling, romantic excitement from first page to last, THE PRINCE AND I will sweep you away!"

"Beautifully written and filled with the brim with that famous Karen Hawkins charm, THE PRINCE AND I is a darn right exhilarating and adventurous read!"

"A wonderful adventure filled with laughter, love, and justice."

"THE PRINCE AND I is . . . compelling, mesmerizing, and just plain fun to read!"

The late morning sun slanted through the shutters as Murian sank deeper into the tub, warm water sloshing over her shoulders. The large brass tub was yet another prize she’d removed from the castle during her flight to safety and she took great delight in thinking of the earl having to use one of the small tubs she’d left behind. He might be able to sit in one, but barely, and only if he folded his legs in front of him, which would make it most uncomfortable.

Grinning, she slid further into the water so that it encircled her face and her hair fanned around her. She’d been singing her favorite song, one her mother had taught her when she was a child, a Gaelic song about maidens and knights. With her ears underwater, her voice was muffled and – to be honest – much improved.

The warm water felt heavenly, her cares dissolving into the thick curls of lavender-scented steam that rose from the tub. It had been a long few weeks and she’d needed some time to let her cares go.

Of course, her biggest care now, besides finding Robert’s journal, was the prince. Try as she would, she hadn’t been able to stop thinking about him, wondering why he’d taken such an interest in her. Was it mere pride because she’d bested him at a sword fight? She didn’t think so, seeing as how he’d returned the favor almost instantly. Of course, if she hadn’t slipped— No. It was better not to dwell on might-haves. Life had already taught her that lesson far too well. Better to keep her mind in the present.

She shouldn’t even be thinking about the prince; she’d only met him a few times, and it was highly likely she'd never see him again. Still . . . there was something about the man that stirred her curiosity. She felt as if she knew him in some way, which made no sense, for they had nothing in common. “Nothing,” she told herself. “Not one blasted thing.”

She should just forget him. And of course she would for she had many, many things that needed her attention more. Like how to get the necessary supplies to repair their cottages, and when it might be safe to slip back into Rowallen Castle to find the proof she needed to unseat the earl.

She reached out of the water and grasped the high sides of the tub, pushing herself into a sitting position. Once there, the water lapped at her shoulders as she leaned back against the elegant slant of the tub, her hair clinging to her neck before fanning around her shoulders.

She closed her eyes. Life was always surprising. Who would have ever thought she’d meet a real prince? And such a handsome one, too. “Prince Max,” she said aloud. “Mighty, oh-so-sure-of-himself Prince Max.”

Heart pounding, she lifted her head and peered over the edge of the tub.

The prince stood just inside the window. Dressed in his red and gold uniform, a black cloak hanging from his shoulders, his black hair mussed as if by the wind, he looked large and powerful and altogether too pleased with himself.

Amusement curled his hard chisled mouth into a faint smile and he bowed, his dark green gaze flicking over her. “Good morning, Lady Murian. I hope it is not too early for a visit? As you can see, I could not stay away.”