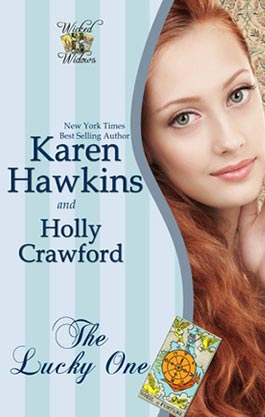 The Second Installment of the Wicked Widows novellas!

Beautiful widow Katelyn Worthington, Countess of Tyndale, is forced by her mother-in-law's unethical attempts to gain possession of Kat's daughter Lilly to flee their ancestral home and find a temporary refuge in London's newest hotel, the Burnham. On the run and desperate to protect her daughter, Kat is forced to trust the hotel's dark and mysterious owner.

Ambitious and common born, James Highbridge is determined to make the Burnham the best, most sought-after hotel in London regardless of the cost. His plans are well on their way when he finds a bedraggled Kat Worthington on his hotel's doorstep. Despite himself, James cannot refuse shelter to the beautiful Kat, although his usual ruthless, common sense tells him she's trouble.

Will James's burning ambition overpower his growing passion for the beguiling Kat?

The moment he laid eyes on her, James Highbridge knew she was trouble.

The way the lady planted herself before the front desk screamed intransigence. Her bonnet, sodden from the icy rain, hid her face while her red hair hung in damp straggles down the graceful curve of her back. Yet as drenched as she obviously was, she stood staunch and immoveable while her fine, green velvet pelisse dripped on his hotel’s pristine chequered marble.

He made a mental note to have the maids attend to the puddle before a guest slipped. The Burnham Hotel could hardly compete with Mivart’s or Grenier’s if guests turned up with twisted ankles at best, or broken necks at worst.

Danvers, the desk clerk, shook his head with obvious regret. “I’m sorry, miss, but as I’ve said, we’ve no rooms.”

“That cannot be,” the bedraggled miss exclaimed. “You must have a room somewhere.”

Her refined voice held the honeyed bite of well-aged whisky.

James prided himself on navigating well around trouble. Such a prudent course had led him to secure his fortune with the East India Company, and invest enough wealth to cater to his ambitions. Trouble, he reminded himself, was bad for business. Had he not drilled such into the minds of his employees?

Yet even as he thought it, his eye caught the glimmer of a raindrop as it trailed down the delicate, pale arch of her throat to the edge of her collar.

Before Danvers could politely, but firmly, turn the lady away yet again, James surprised everyone, himself included, by saying,  “Do we have a problem?”

The hotel clerk looked at him in relief. “No, sir. I mean—”

James fought for a breath that had somehow been knocked out of him. The unseasonably cold weather had spurred color in her high cheeks, and turned her sensuous mouth to a mulish line. Her eyes, slightly uptilted at the corners, flared as green as the Irish hills he’d escaped twenty years ago.

She sent a glare at Danvers, before saying, “We need a suite, and this gentleman claims there are none to be had.”

James blinked. A little girl—six, perhaps seven?—stood tucked between the woman and the front desk counter. Even with the fatigue clearly stamped on her face, the girl nevertheless looked up at him with warm, inquisitive eyes, green as her mother’s.

Disappointment stabbed through him. If she had a child, that meant she was married. Pity.

Danvers fluttered the corners of the pages of the registry in agitation. “We’ve those visiting foreigners for the delegation. They’ve taken the last of our rooms—and our suites—as I’ve tried to explain.” He turned the registry for James’s perusal.

He needn’t have bothered. James always made it a point to know who and what took lodgings under his hotel’s roof.

There was no help for it then. James would have to turn them away. Just as well, his practical sense noted. Chivalry often proved more nuisance than not. And as the lady was married anyway . . . . “Madam, I’m afraid—”

“But Mummy, Tetya Catherine said we should stay with her.”

“Lilly, you mustn’t refer to the duchess so. It’s not polite.”

Ah, she knows a duchess, does she? That could prove promising.

The lady smoothed back a lock of her child’s red-gold curls. “Besides, we cannot call upon her grace.”

Lilly frowned in obvious confusion. “Why not?” Her small fingers traced whorls in her mother’s damp velvet sleeve. “She’s our friend.”

“We’ll discuss it later.” The lady looked through the entryway doors and out at the driving sleet. Although it was late afternoon, the weather had darkened the day to near evening. The bite returned to her voice. “We’ll find someplace else. There are other hotels.”

Normally, of course there were. But with Napoleon defeated, many delegates from the Grand Alliance had descended on London to be both part of the celebration, and the political jockeying left unresolved from Vienna’s Congress months earlier.

With a haughty nod in his direction, the lady and child began squishing their way across the lobby toward the wide doors. James had a sudden image of another woman and another child, left in the rain and looking for shelter. There’d been no hotel then. Just unfriendly faces filled with either pity or condescension.  “Give them the Queen’s Suite.”

“Then clearly Mister Rajah must be mistaken. Mustn’t he?”

Danvers blinked, then straightened his spectacles. “Of course, sir. Shall I have the maids—?”

“Yes, straightaway.” He paused. “Send up hot water sent as well. And have someone mop the foyer before we have a mishap.”

Danvers muttered a “Very good, sir,” even as James lengthened his stride to catch the females. He reached out to grasp the lady’s elbow and draw her to a halt. A tingle sparked as he touched the warm, damp velvet. “Madam, we’ve discovered an availability.”

Rather than gratitude, she cast him a look of suspicion. “Really? Just now?”

He shrugged. “There are rooms, and then there are rooms. I promise you and your family will be more than comfortable.”

To his surprise, she looked at her daughter. The little girl pinned him with a wise-beyond-her-years glance that made him want to squirm.

“If we can’t go to Tetya’s—I mean her grace’s—then here will be good.” She nodded to her mother for good measure.

The lady smiled in return, but when she turned to James she was all business. “Very well, we shall take the room.”

He’d had no doubt. “Of course. Your baggage?”

Ah. One of those ladies who found decision-making the hardest of all skills, and so deferred the inevitable by packing every piece of clothing they owned. Hardly surprising, yet he felt another pang of disappointed, nonetheless. He preferred women who knew their own mind. “I’m sure we can handle it.”

He led them through the glass doors he’d had shipped all the way from Liège. Outside, the rain still pelted down, though thankfully the staff had continued to sweep the portico free of ice. A young, sandy-haired footman stepped up. James mentally sifted through his employee records until he recalled the lad’s name: Barstowe, the newest and youngest doorman. James had promoted him from porter because he liked the lad’s ambition.

Barstowe, to his credit, wore the Burnham dark green livery with all the pride of a cavalry officer. He snapped to attention when he caught sight of James. “Sir! Shall I—”

“Of course, sir. Madam, I—ah— took the liberty of securing them from the cab.” Barstowe gestured to a towering stack of trunks and bandboxes tucked underneath the hotel’s awning.

James blinked. Good God. Had she packed all her worldly possessions? “Madam?”

She ignored him to take stock. “Everything seems to be here.”

He came up beside her, and the scent of her perfume held a note of spice that intrigued him. “Why wouldn’t everything be here?”

She jumped, turning wide, green eyes on him. “What?”

“The staff at the Burnham is beyond reproach.”

“Here, Mummy.” The girl Lilly tugged at a small, brown case half buried under a trunk.

“Careful there,” he cautioned, even as the pile threatened to sway. He shouldered against the heavier trunk before it could do more than shudder, and freed the smaller case. Dark splotches stained the outside like ink left in the rain. Bits of what looked like paper stuck out between the seams. A card slipped free only to have the wind send it flying.

“I need that!” The lady grabbed for the paper.

He caught it before it could land on the drenched, icy walkway. The card’s plainer side had a geometric swirl like most cards, but the other side was brightly colored and had winged mythological creatures in each corner. A large, red circle marked with odd symbols lay at the center, supported on the back of a jackal-headed man. At the bottom of the card, letters spelled out Wheel of Fortune. A Tarot card?