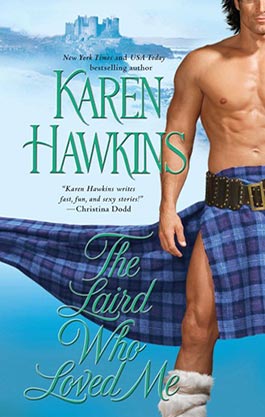 Handsome Alexander MacLean enjoyed his intoxicating flirtation with lovely Caitlyn Hurst… until she embarrassed him in front of the entire ton. Orchestrating Caitlyn’s attendance at a fashionable house party, Alexander plots her downfall. But to his fury, her charm and wit thwart his plan to ruin her.

Her disastrous London season left Caitlyn filled with regret and determined to make things right with Alexander. She’s delighted to find him at the house party to which she’s unexpectedly invited – but it’s clear that the sexy, arrogant Highlander hasn’t forgiven her. So Caitlyn comes up with a bold scheme, proposing an unusual contest drawn from legend: each must complete a set of “mythic” tasks. If Caitlyn succeeds, Alexander promises to relent and forgive her previous rash behavior; if he succeeds, she will join him in his bed! But can Caitlyn force Alexander to give up his quest for vengeance without giving up her heart in return?

"I laughed, cried and just about fell out of bed in shock at the things that were happening!"

"The story is filled with biting repartee, humor and sexual tension that will keep you turning the pages with glee."

"THE LAIRD WHO LOVED ME flirts with the reader leaving us laughing and ready for another conquest."

“This is about  what happened three months ago in London.” Caitlyn’s chin jutted defiantly. “Admit it, MacLean. That is what you’re really angry about.”

Alexander frowned. “This has nothing to do with London. If I’m upset now, it’s because your thoughtless actions put both you and your horse at risk.”

Her gaze darkened. “I didn’t mean to put anyone at risk—not now, and especially not three months ago in London. MacLean, I—“

“We are not going to discuss London, not now and not ever. In case you haven’t noticed, it’s going to rain. These sprinkles are just the beginning.”

She glanced up at the sky through the break in the trees. “You made this storm.”

His gaze had followed hers, but now he looked at her expression, searching for the usual flicker of fear or a flash of envy, but all he found was a calm certainty. She’s brave; I’ll give her that. “As storms go, it’s a small one, but it’s still going to be wet.”

“I’m not afraid of a little water,” she returned smartly. “MacLean, whatever mistakes were made in London are long over. That was three months ago, too.”

“Those mistakes cost other people more than you know. My own brother is still paying for your selfish errors.”

“I made some mistakes, I admit it. But I never wished to hurt anyone.”

“No, you were too busy getting your own way to think of that, weren’t you? Too busy setting a trap to try and force me to marry you.”

She flushed. “I never wished to marry you. I was only going to hide in your carriage as you left town, showing myself after it was too late to return.”

“Which would force me to offer for you.”

Something about her manner let him know she was telling the truth. The rain began to fall in earnest, but Alexander was too stunned to notice. “You . . . you were going to refuse me?”