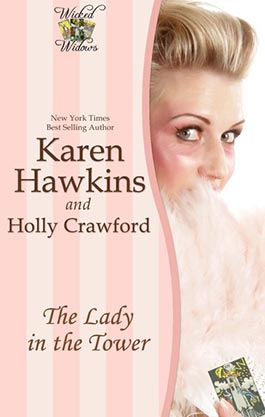 The Wicked Widows with bonus excerpts of the next two Duchess Diaries!

Eight months ago, noted physician Sir Richard Thornton was called to attend the final days of young Baron Kilkenny. It was a sad, tragic case, made more so by the hauntingly beautiful Baroness Kilkenny, Jane Doherty, who had tried desperately to save her own husband. Having witnessed so many of life's worst tragedies, Richard believes himself safe from distracting attachments, but Jane's haunting beauty has lingered . . .

She refuses to accept the conventional . . .

The daughter of a prominent physician who trained her in the healing arts, Jane believes she could have saved her husband if only taciturn, over-bearing Sir Richard hadn't interfered. Jane vows to have nothing more to do with the abrupt, rude doctor and works hard to establish a thriving practice of her own for those in need. But society isn't happy with her attempt to move in a man's world, and the scandal sheets spread scurrilous rumors and label her the 'Wicked Widow.'

Richard is fascinated by the thought of the angelic, delicate Jane as a wanton and wild 'Wicked Widow,' which is why he's spent a considerable amount of time making certain their paths would never again cross. But fate has other plans and soon Jane and Richard find themselves sharing a patient while heated tempers - and even hotter passion - flares once again.

"This was a perfect Enemies-to-Lovers story and the co-authors found a great way for Jane and Richard to find their common ground over the care of a young boy."

~ The Window Seat on a Rainy Day

"The dialog was fun, the hero studly and the heroine just a little head-strong."

Finally, the hackney drew to a halt and she threw open the door and climbed down before the cabbie could assist her. She pressed the necessary coin into his hand and then, gathering her satchel, ran up the stairs to the duchess’s fashionable townhouse. The door opened before her foot touched the top stair.

“Thank goodness you’ve come!” The butler, Higgins, cast her a harried gaze, his gray hair wisping about his head like a frenzied halo. “Her Grace is unwell, and I’m about to go to war with Mrs. Ballard.”

Mrs. Ballard was Catherine’s housekeeper. “Whatever for?”

“Because while I was sending Her Grace’s note to you, that harridan called for another physician!”

Jane sighed. “Is he already here?”

“Yes, my lady, and I can tell that Her Grace isn’t happy about it and neither am I! I told Mrs. Ballard not to call for another—”

“Higgins, please, you’ll have an apoplexy. Take a slow breath.” While the butler did so, Jane pulled off her gloves. Catherine’s housekeeper was the last of Jane’s concerns. “Where is Her Grace?”

“The morning room.” Higgins hurried to open the doors for her.

“Catherine, whatever is—” Jane froze.

The duchess lay upon a chaise, looking pale. And standing beside her and measuring her pulse was the very last man Jane had ever expected or wanted to see.

Sir Richard Thornton once again loomed over someone she cared about.

“Get away from her,” Jane ordered coolly, though her heart pounded in her chest. “She’s my patient.”

Thornton lifted sea-blue eyes to hers. A black brow, a shade lighter than his ebony hair, lifted. “One does not own a patient. We merely borrow their time.” He stood tall and broad shouldered, a fashionable silver-tipped cane clasped by one hand.

"People may borrow your time, but not mine."

“Mrs. Ballard sent for Sir Richard without my knowledge.” Catherine said, looking up at the physician. “But I must credit the good doctor with his speedy response to my housekeeper’s rather histrionic summons.”

“It appears Her Grace suffered—”

“I beg your pardon, but I asked Her Grace and not you.”

Jane couldn’t tell if he was clearing his throat, searching for words to set her on her heels, or what, but the noise annoyed her.

The duchess made a face. “I'm feeling better already. All this fuss over nothing.”

Jane lifted a brow. Catherine made light of a great many things, one of the most significant being her health and state of mind, which Jane believed were inextricably linked. She would never forget how their paths first had crossed two years ago. She’d been attending a garden party with Albert, and had retired to one of the rooms set aside for the ladies. She’d just entered when Catherine burst into the room, white-faced. She would have collapsed if not for Jane helping her through the episode with breathing techniques and conversation. Later, when she was able to speak, Catherine had said she’d never recovered so quickly or easily. She and Jane had been friends ever since, a friendship that had grown closer when they’d both lost their husbands within six months of each other: Jane’s to a wasting illness, and Catherine’s to suicide.

Jane took Catherine’s wrist and measured her pulse. “When did this spell begin?”

“I was at breakfast, reading through the newspaper and—” Catherine paled, pressed a hand to her throat, and clenched her eyes shut.

Jane opened her leather bag. “Dizziness again?” At her friend’s murmur of assent, she took out a small wooden box from the case, and removed a small brown bottle. “Did you lose consciousness?”

“I just asked the same question.” Thornton’s voice rumbled like distant thunder. “I do know how to take a patient’s history.”

“Good for you, Thornton. I’m sure that comes in quite handy when you’re with one of your patients.” Jane looked up at him, and hated the fact that she had to do so to make eye contact. His face was more tanned than she remembered, yet there was a gauntness to his cheeks that had not been there when last they met. What had the man been up to? His gaze narrowed and she detected a bit of ice had entered his eyes. Good. Turning back to her friend, she asked, “You were saying?”

“No, I didn’t faint.” Catherine frowned. “At least I don’t believe so.”

Jane could feel Thornton’s gaze like a weight across her shoulders as she moved to unstopper the bottle, releasing scents of lavender and peppermint into the air. “How did you come to be here, in the morning room?”

The duchess hesitated. “I think I walked. I thought that if I could just rest upon the chaise for a moment, then I might feel better.”

“Do you remember walking here?”

“I see.” She made to dab a bit of the oil concoction on her friend’s hand when Thornton seized Jane’s wrist.

He scowled. “If Her Grace is dizzy, smelling salts will only make her feel worse.”

“Agreed.” Jane jerked her hand free, his fingers leaving an odd trail of warmth. “And ammonia would only make her headache worse, which is why this isn’t hartshorn."

His gaze flickered to Catherine. “Do you have the headache as well, Your Grace?”

Thornton scowled. “You didn’t mention it when I questioned you earlier.”

“You didn’t ask,” Catherine said, covering her eyes with a hand.

Thornton’s gaze narrowed and he gestured to the bottle in Jane’s hand. “What is that?”

“Essential oils to soothe her nerves.”

His mouth quirked but even though Jane desperately wished to erase his smug look, she found herself also noticing what a sensual mouth he had. I never noticed that before. Her gaze flickered over him, noting with approval his blue coat, buff breeches, and black boots. Her memories of Sir Richard were so tinged with unpleasantness that she’d only remembered the bad aspects of his person. But now, she was beginning to find out all sorts of intriguing things about a man she'd thought she hated. What other surprises do you have for me? Can I afford to find out?