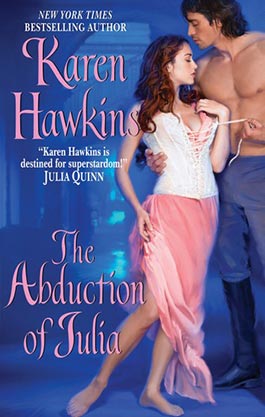 The Abduction and Seduction Series, Book I

What can a respectable Regency miss do when kidnapped by a nobleman intent on marriage? Why, marry him, of course.

Julia Frant has secretly loved Alec MacLean, the wild Viscount Hunterston, from afar. So when he accidentally snatches her instead of her lovely scheming cousin for an elopement to Gretna Green. Julia leaps at the chance to make her passionate dreams come true.

Alec’s in no position to quibble: if he doesn’t marry by midnight and live scandal-free for a year, he loses his inheritance. At least marriage with do-gooder Julia will guarantee his fortune. But as his plain brown wren transforms herself into an elegant swan, Alec suddenly can’t stay away from his last-minute wife – and when he kisses her, the inheritance is the last thing on his mind. Unfortunately, scandal can occur from the best of intentions…and Julia is never short of good intentions!

"The Abduction of Julia is guaranteed to make you grin."

"The Abduction of Julia is a wonderful indulgence in regency romance. Romance lovers would love this!"

~ Girls Without a Bookshelf

"(The Abduction of Julia is) 4.5/5 Stars, and I look forward to picking up the rest of the books in the series!"

“I won’t need this now.” A bitter note tinged Alec’s deep voice as he tossed a paper upon the table.

Julia rested her chin on the edge of her mug and breathed in the spicy sweetness. A warm glow settled around her and the small parlor became cozier and more intimate. She squinted unabashedly at the viscount’s profile, noting the length of his lashes and the proud curve of his mouth.

He looked up and caught her gaze. For a split second, she couldn’t breathe. Then she found herself adjusting her spectacles and blindly reaching for the paper. “It’s a Special License,” she said stupidly.

Alec nodded, returning his preoccupied gaze to his mug.

The license was dog-eared and crumpled, with his name scrawled elegantly across the bottom. “Alec Charles MacLean, Viscount Hunsterston,” Julia mouthed silently.

She sipped her drink. It was, she decided, even sweeter when taken from the bottom of the bowl. The innkeeper must have forgotten to stir it. She swished the punch about in her mouth, her idle gaze falling back on the paper. “You didn’t write Therese’s name out.”

“I didn’t have time to stop and ask her entire Christian name, so I just wrote ‘Miss Frant.’” The viscount shrugged. “It served; the Archbishop did not question it.”

Julia waited for him to say more, but he returned to his own dark reflections, his attention sliding away from Julia all too easily. She sighed and pulled her mug across the crumpled license. Maybe the heat from the warmed metal would iron it out.

Her father had always taught her the importance of neatness. She smiled wistfully. Though he had died over five years ago, she thought of him daily. She especially missed his ability to see right to the center of the most difficult situation and point out the one logical answer. It always angered Julie when Therese sneered at her father. It was true he had left England and ignored the position his own father had wished for him, but he had acted with the purest, most noble of intentions. He had acted for love.

Love. An idea slipped into her head with an almost audible thunk.

“I know how to help you,” she said wonderingly.

Alec lifted his brows, his eyes the color of frosted glass. “How?”