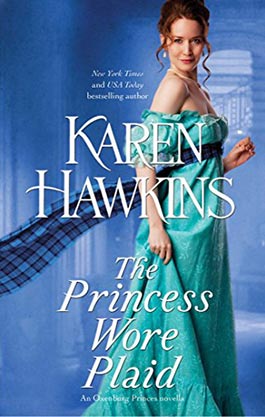 A princess once bejeweled but now tattered…
Royal princess Tatiana Romanovin is the beautiful, wealthy, and spoiled favorite of the King of Oxenburg. On her way to her cousin’s wedding in the Scottish highlands, she and her entourage are held up by a gang of ruffians. Frightened, her servants flee, and Tatiana soon finds herself alone in an inn with no servants, no funds, and no proof of her identity. Destitute, she accepts the offer from a sympathetic (but unbelieving) innkeeper to work for her room and board while she waits for an answer to the missive she’s sent to her cousin Prince Nikolai. With no other recourse, Tatiana scrubs floors and dirty linens, waiting for her prince to come…

A proud lord once lost and now found…
After a brutal, bloody battle with the French Navy left Lord Buchan limping and surly, abandoned by his betrothed because of his twisted leg, his lordship hides away at his manor house in the countryside. He leaves only once a week to eat at the local inn, drawn by the expert cooking of the innkeeper’s wife. One day, Buchan arrives to find that the innkeeper has a new servant, a beautiful scullery maid with a queenly air, and flashing green eyes that leave him breathless and increasingly aware of his lonely existence…

Love may find them yet…
The challenge of winning his way into Tatiana’s heavily protected heart stirs Buchan back to life…but can he and his twisted leg—and broken heart—win a proud princess whose only goal is to leave Scotland and return to the court where she’s the crowning jewel?

Face hot from the embarrassment of his fall on the slick stones, Lord Buchan dusted snow from his hip and then limped into the inn, his cane noisy on the scarred wood floor.

Mr. Drummond the innkeeper came around the hall corner and then stopped, looking surprised. "Och, Lord Buchan! I dinnae hear you arrive."

Relieved his fall hadn't been witnessed, Buchan gritted his teeth and made his way down the hall, ignoring the fire that seemed to run down his scarred leg. "I just arrived," he informed the innkeeper.

"Excellent! I just started a fire in the private parlor, hoping you'd make it through the storm."

The innkeeper crossed the hallway to the parlor, speaking over his shoulder as he went, “Mrs. Drummond will send oop the pie as soon as 'tis ready."

The innkeeper’s voice faded as he turned into the private parlor, Buchan lagging behind. When he reached the room, he was happy to find the room warm and cozy, the lanterns lit, a fire crackling merrily.

Drummond picked up a small pan and brush and swept some loose ashes from the hearth. “There’s naught as cold as an Aberdeen wind, is there, my lord?”

Grateful the innkeeper’s attention was focused on the ashes and not on his guest's slow progress, Buchan clenched his jaw and sank into his usual chair. “It’s brutally cold.” He leaned his cane against the table and, using both hands, stretched his leg before him, ignoring the vicious, unrelenting pain that shot from knee to hip. Dr. Fraser believed the muscles seized up when strained, sometimes to the point of ripping the scar tissue that had formed around the injured muscles.

Of course, understanding what caused the intense pain did little to lesson it, and Buchan, denied what he really wanted – freedom from the pain that tormented him day and night – had ordered that from now on the doctor was to keep all such worthless knowledge to himself.

Drummond replaced the small broom and dustpan in the holder. “Would ye’d like a wee dram to ward off the chill?”

“A dram is never amiss.” Drummond’s superior whiskey and his wife’s excellent cooking were the two reasons Buchan reserved the private parlor at the Red Lion each and every Friday. They were worth the trip from Auchmacoy, even though the jouncing of the coach left his leg aching and sore for days after.

The innkeeper went to a sideboard where he poured a generous measure of whiskey into a chunky glass. As he did so, he sent a cautious glance Buchan’s way.

And in that glance, Buchan realized that the innkeeper had witnessed his fall. A wave of irritation tightened Buchan's jaw, but with it, a rare moment of appreciation for the innkeeper’s respectful and non-intrusive manner. Buchan had to constantly fight his own servants to keep them from rushing in and offering to assist him every time he sneezed. And he could only shudder to think of the outcry had they seen him fall.

The lot of them seemed to think he was in need of a keeper of some sort. Fools. I need no one but myself.

“There you go, my lord.” The rotund innkeeper brought the glass of whiskey to Buchan. “Tha’ will warm your bones.”

Buchan took a sip, and instantly the mellow golden tones of the whiskey washed over his tongue and dampened his displeasure. “Ahhh. The water of life.”

Drummond’s broad face shone with such pleasure that Buchan regretted his earlier irritation. “I would like to purchase some of this stock, if you’ve a mind to sell it. But after dinner, of course. Mrs. Drummond’s venison pie calls.” He wished he could secure a decent chef at Auchmacoy, but none could be induced to bury himself in the Scottish countryside with someone who never entertains. For dinner most nights there was only himself and perhaps Dr. Fraser.

“I’ll send the new girl in with your pie. We lost our kitchen maid just last week. She tripped o’er a log in the kitchen and broke her arm.”

Buchan had an instant memory of a thick set, rather red-cheeked girl with a wide, empty-headed smile who’d reeked faintly of garlic. “I’m sorry to hear that. Has Dr. Fraser seen her?”

“Nae. Iona - I mean, Mrs. Drummond set Nance's bone and wrapped it oop, she did, and then sent the lass home to heal. Her ma is takin’ care of her now.

“I’m glad you were able to replace her.”

“Aye, a guid bit of luck, tha’. Two days after Nance had her accident, a lass wandered in, needing work. She’s nae a—“ The innkeeper seemed to catch himself, and after a pause, he added gruffly, “She’s different, she is. And she needed some trainin’, but tha’ is to be expected. She’s quick, I’ll give her tha’. We ne’er have to tell anything twice.” Drummond looked about the room to make sure everything was in order and then waddled to the door. “The venison pie will be oop soon. If you need anything more, just ring the bell.”

With a deep bow, the innkeeper left, his footsteps disappearing as he went into the kitchens.

Buchan leaned back in his chair, the crackling of the fire and the tasty whiskey slowly warming him and lifting his low spirits. He rubbed his aching thigh, glad the muscle was finally releasing. The early days immediately after his injury, there had been no easing of the pain. Late at night, wracked beyond thought from the agony, he’d begged Dr. Fraser again and again to cut off the injured leg and be done with it. Buchan wasn’t proud of those moments and could only be thankful they were blurred by heavy doses of laudanum.

Light footsteps sounded in the hallway and the new maid entered, turning at once toward the table at the end of the room. He lifted his glass for a sip and glanced at her without interest, but the second his gaze fell upon her, he couldn’t look away.

She was tiny, this lass. Had they been standing side-by-side, her head would have been two hands’ widths below his shoulder. Yet she moved with an economy of purpose that gave an impression of height.

Unlike other maids who preened and giggled and tried to catch his eye, she didn’t spare him so much as a glance as she carried the tray, her attention on her task and nothing else. In her small hands, the silver tray looked twice as large as it usually did and she walked slowly, carefully, one foot in front of the other as if her burden were in dire danger of falling to the floor. Indeed, when she stopped by the table to set it down, he noted that her hands trembled as if unused to the weight.

He fought the urge to arise and assist her, although he knew his ill-favored leg would not support such a dashing and unlikely effort.

She slid the tray onto the table and then bent over it to arrange the items. He watched over the edge of his glass, noting that her face, hidden by the shadows, remained tantalizingly out of view while the firelight played across her thick, shiny chestnut hair. Perfectly straight and twisted into a bun, it looked ready to tumble down, as if the pins couldn’t hold the weight of those shimmering strands. It would reach her waist, he decided, and he had an instant impression of her naked, her small, rounded breasts peeking through that thick, shiny curtain of dark hair.

Bloody hell, where did that come from? Pushing the unwelcome thoughts away, Buchan took a steadying drink of his whiskey. Had Drummond mentioned the lass’s name? Buchan couldn’t remember.

The tray finally adjusted to her satisfaction, she straightened and the firelight that had played so warmly on her hair now lit her face. Despite her chestnut hair, her skin was creamy and fair, her face oval and patrician. High cheekbones accompanied by a pair of thickly lashed green eyes that tilted just the faintest bit at the corners gave her an exotic look. Though attractive, she missed being classically beautiful by the wideness of her mobile mouth and the stubborn line of her chin. Still, there was something intriguing about her – the delicateness of her neck and shoulders, the sensual promises of that too-full mouth, and the unconcerned way she went about her business without affording him so much as a glance.

“Who are you?” He hid a wince of regret at the harshness of his own voice, for he hadn’t meant to bark.

Her gaze flickered across him, her delicate eyebrows arched in disbelief. “I am the maid.” Heavily accented and smoky, her voice ran across him like the licks of a feather, tantalizing and tempting.

“I know you’re the maid,” he said shortly. “But what is your name?”

She eyed him with cool disinterest and then adjusted a spoon on the tray. “That, you do not need to know.”

In all his years no servant had ever spoken to Buchan in such a way. Oh, there’d been servants who’d overstepped their boundaries, usually maids who flirted and sauced, hoping to win vales or a place in his bed. But he’d never had one so casually, or so thoroughly, dismiss him. Damm it, who is this woman?