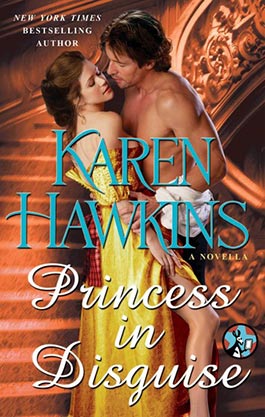 The Duchess Diaries, An E-Novella

When the Earl Kintore stumbles out of a snowstorm and into a ramshackle inn, he finds a lovely maid asleep on a settee before the fire. On impulse, he kisses her and discovers that she's not a maid at all, but a princess in disguise ...... When the princess's men find the two alone, Kintore soon discovers that far more than his life is at risk, for the princess is on the hunt for a strong, handsome husband and she's decided that he might be the one!

A fun, lively novella about two people on opposite paths!

"In this fast-paced Duchess Diaries novella, author Karen Hawkins delivers warmth, humor, romance, and a touch of heartache. Princess in Disguise is a great story to curl up with on a cold winter’s eve."

"It is a light, fun and passion-filled read making it the perfect Historical Romance novella."

Hands already held out toward the crackling fire, Kintore stepped around a settee and went straight to the welcome blaze. Instantly, he soaked in blessed warmth, his hands aching as feeling returned. A mere moment later, his teeth stopped chattering and he found that he could once again wiggle his toes inside his boots. Much better.

Sighing with relief, he shrugged out of his coat, the shoulders damp from melted snow, and tossed it over the back of a nearby chair.

He’d just turned back to the fire when the unmistakable sound of a woman’s sigh fluttered through the air. He froze and slowly turned. Because of the settee’s high back, he’d missed the fact that he was far from alone. A woman, dressed in the plain black of a servant, was curled upon her side, her hands tucked under her cheek like a child, sound asleep upon the settee.

Her skin was pale while her hair was as black as the night. Thick and shining, it was pinned away from her face in the same severe, unstylish bun most servants wore. Ah, a maid. You thought the heavy snow would keep guests away so you could take a nap, hm?

He didn’t blame her; the quiet fall of snow muffled all noise while the low light and crackle of the fire made a nap the most natural thing in the world.

Smiling, he came to stand beside her, the light from the fire casting reddish lights over her. Though not beautiful in the accepted sense, she was a taking thing. Her face was slender and angular, with thick lashes splayed over high cheekbones. Her mouth was wide, her lips soft and full, but set over a stubborn chin that warred with the delicate line of her nose. Even more fascinating were her eyebrows, which flew up at the ends in a delicate sweep, giving her face a piquant look.

Kintore couldn’t remember being so intrigued by a woman in a long, long time. Had I know that the Cask and Larder had such a taking little maid, I might have visited sooner. Perhaps this snowstorm had been a good omen after all. He reached down and ran a finger over her cheek.

Her lashes fluttered and then, with a soft sigh, she turned her face toward his hand, her skin deliciously warm against his fingers, her breath teasing his palm. It was such a sensual gesture that the desire to kiss her awake. Would she have a voice like the black silk of her hair, one that would entangle him into her web of sleep?

The silliness made him chuckle to himself. You are far drunker than you thought. Doubtless her voice was unschooled, shrilled and as far from the silk of the black hair pulled back from her pale face as possible. Or was it? some secret voice whispered. What if her voice is as intriguing as she?

He’d never know the quality of her voice or anything else unless he woke her, and what better way to do that than to follow his impulses and kiss her awake?

He slipped his hand from her face and carefully sat on the edge of the settee at her side.

Then, he bent and touched his lips to hers.

Instantly, she stirred awake, her warm and soft lips moving under his as her thick, sooty lashes fluttered open, her eyes a startling pale blue like ice over a river. Such eyes. I could drown in them.

He pressed his lips more firmly to hers and she moaned softly against him, her lashes fluttering closed. He started to break the kiss and pull back, but she gripped his lapels, lifted her head, and kissed him anew with a startling passion.

Her urgency instantly stirred him and he answered her kiss for kiss, her lips parting beneath his as she teased and tempted him. God, what a lively piece!

Encouraged, he slid his hand to her waist as she clasped both of her arms about his neck, stirring sensually against him as her hip rubbed his.

His heart thundered and he kissed her over and over, nipping at her plump lower lip as their breaths quickened as one. She’s a hot-blooded piece, this one. Perhaps staying in this godforsaken place wouldn’t be as boring as he’d expected.

Her hand slipped to his cheek and then down to his chest, pushing aside his coat and tugging at his waistcoat as if seeking for a way to his bared skin. Kintore’s cock hardened instantly and he slid his hand from her arm to her breast, cupping the full weight gently as his thumb found her hardened nipple—

She caught his wrist and his gaze locked with the maid’s, both of them frozen in place. She broke the kiss, her breath quick between her lips.

But then her gaze flickered past him, and quickly back. “I’m so sorry,” she whispered.

That voice. It was everything he’d dreamed and more. Lightly touched with an exotic accent, it was as rich as velvet. Her words trailed over him and caught him in a snare of surprise, for there was nothing coarse or unschooled about the way she spoke. His gaze dropped to where her fingers still encircled his wrist, his hand still cupped over her gown about her breast. For the first time he noted that the fabric of her gown wasn’t the broadcloth as he’d expected from a servant, but was instead a heavy silk, trimmed at the neck and wrist with delicate and very expensive looking black lace.

He returned his gaze to hers. Good God, she’s not a servant at all.

It was but a second of hesitation, but it lost the day. For as he stared into the beautiful icy blue eyes, bewitched by her lush voice and intrigued by her accent, his mind floundering with the realization that the maid he'd kissed was in fact, a lady, a heavy hand landed on his shoulder.

Kintore turned to find a huge man standing behind him. Built like a bear, the giant’s broad face was covered with a coarse beard, his thick black brows drawn low, his eyes gleaming with fury. "Nyet!" His hand, where it rested on Kintore’s shoulder, squeezed with an agonizing amount of strength.

Kintore leapt to his feet, but the man was too quick. With lightning speed, the giant’s huge arm arced back and hit Kintore dead on his chin.

Still drunk from scotch and dizzy from the lass’s kisses, the earl went down like a bag of grain, his head hitting the wooden arm of the settee.

And yet even as he fell into the blackness, it wasn’t the blinding pain of the hit that went with him, but the wild, heated gaze of a velvet-voiced lady, sleep still heavy in her amazing pale blue eyes.