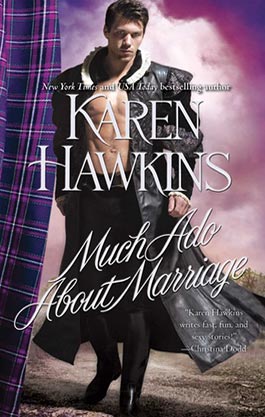 At long last, I’m getting to fulfill a dream: completely rewriting my first book to include my beloved MacLeans. This book, an Elizabethan-set historical romance, was written under another name. I still love saucy Fia MacLean and the dashing English earl Thomas Wentworth, but as I grew as a writer I longed to tell the story as well as it deserved to be told. Now I have that chance.

Meeting lovely Fia is all it takes to turn Thomas’s espionage mission in Scotland topsy-turvy. Flirting in the woods with the seductive, infuriating lass leaves him captive in the MacLean castle, but his escape attempt brings worse! Caught in an apparently compromising position with the lady, the English earl has no chance to make any ado before he finds himself wed. Thomas is on a serious assignment, but Fia’s sharp tongue and saucy wit bring mayhem to his life. How can he concentrate, when just one glance from her makes him burn with desire?

P.S. As an added bonus, I get to tell how the MacLean curse became entwined with my upcoming series—featuring the Hurst amulet—when the lord of Clan MacLean lays a claim on that treasure and sets in motion the events that lead to the curse.

"Filled with Ms. Hawkins trademark wit, Much Ado About Marriage is a delight from start to finish."

"Quite simply, it charmed my socks off and I don’t think sixteenth century England and Scotland have ever been so fun."

"This is a wonderful story of love, patience, desire, and finding what is truly important."

~ My Book Addiction and More

"The characters are beautifully developed. The story is delightfully filled with wit, emotion and romance."

Drowning—that’s what he was doing. He was drowning in the eyes of a wench who brought him the devil’s own luck. He ached for a taste of her, the sweet fragrance of her hair and the lushness of her rounded body.

Thomas’s gaze dropped to her lips, which were delectably moist. He couldn’t look away from her tempting mouth.

He had to have her.

Thomas reached across the small space that separated them and buried a hand in her hair, pulling her to him. She leaned into him, offering herself so sweetly that his lust burst into flames.

With every ounce of the desire that burned though his body, he kissed her, devouring her sweetness. Fia didn’t hesitate, returning his ardor as passionately as he could have wanted. Her fingers tangled in the folds of his shirt as her soft moans sent him spiraling toward heaven. God’s wounds, she is a hot little piece.

She made him as addlepated as a youth, but oh, what a delectable madness it was. He sank his hands deeper into her hair and tasted the smoothness of her cheek as he feathered sensual kisses over her face, her eyes, her sweet neck, making her gasp with pleasure.

She clung to his shirt, pulling him closer. As he nipped at her ear, he impatiently tugged at the lacings on her bodice. With a soft pop, the tie gave way and the material gaped open, revealing the silken white chemise that barely covered the mounds of her breasts.

Thomas rained kisses down her throat to the hollow of her neck.

Thomas froze. She couldn’t have said another man’s name. His ardor cooled, he pulled back. “No, comfit, ‘tis not Duncan. ‘Tis Thomas. My name is Thomas Wentworth.”

Deep and rumbling, a masculine voice filled the small clearing. “That is useful to know. ‘Twould bring my clan ill fortune were I to kill a nameless man.”

She gave a weak smile and pointed over his shoulder. “Thomas, ‘tis Duncan. I fear he’s found us.”