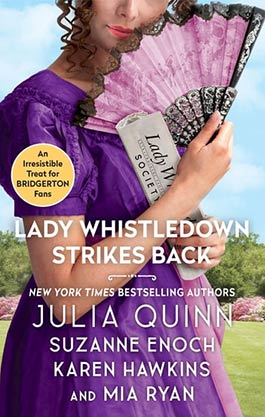 Featuring "The Only One For Me" by Karen Hawkins

Was it the fortune hunter, the gambler, the servant, or the rogue? All of London is abuzz with speculation, but it is clear that one of four couples is connected to the crime.

A roving viscount comes home to rekindle the passionate fires of his marriage . . . only to discover that his beautiful, headstrong bride will not be so easily won.

"(The Only One For Me by Karen Hawkins) was a satisfying wrap-up to a fun anthology. The chemistry between Max and Sophia crackles, and you know it is only a matter of time before Sophia succumbs . . . This is a quick, fun, enjoyable read!"

"The Only One For Me by Karen Hawkins … was scintillating and I was almost sad when I reached the end of the pages!"

"The suspense builds for the final offering, Karen Hawkins's THE ONLY ONE FOR ME. Lady Sophia Easterly and her husband Max's scandalous marriage has been hinted throughout the book. Sophia, known for her way with words and turn of a phrase, becomes tongue-tied with the reappearance of her husband after a 12-year absence. Max returns determined to undo the damage and start their marriage anew. Fireworks galore as these two passionate people battle their emotions. Ms. Hawkins (writes one of) the strongest entries in this anthology…"

"The Only One for Me” from Lady Whistledown Strikes Back is a wonderful second-chance-at-love story. Brilliant dialogue, fascinating characters, and a charmer of a mystery keep the reader turning the pages. Five stars!"

Sophia’s brother spoke up. “Easterly, you’re lucky Sophia will even talk to you. You left her twelve years ago and she has every right to be furious. Which is why she wants an annulm—Ow!” He grabbed his shin under the table before glaring at Sophia. “What in the hell was that for?”

“You must have bumped your knee on the table leg,” she replied, wishing her brother to Hades or some other equally uncomfortable place, like Leeds or Harrowgate.

John rubbed his shin. “Whatever it was, it was pointed and sharp, rather like your shoe.”

“If you were kicked, I’m sure it was because you deserved it.”

Max chuckled. “I see that some things have not changed since I left.”

“Sophia has always had a devil of a temper,” John agreed.

“You should read some of the missives she sent me after I left. My favorite was when she traced my family roots from myself all of the way back to a worm. She used colored ink, too. I framed it.”

Sophia narrowed her gaze. “It took me hours to draw that blasted thing.”

“It hangs on my wall even now.”

She sniffed. “It’s possible that some of my first letters might have sounded somewhat irritated—“

“Eat your dinner,” she ordered her brother. When he looked as if he might speak again, she added, “Unless you wish to leave my house with a spoon embedded in your forehead, you will stay out of this conversation.”

John smacked his mouth closed and sent a helpless shrug to Max.

“Thank you,” she said, sending him a final glare before she turned to Max. Perhaps John was right and she should just take the plunge and get this over with. No matter how she phrased it, it was bound to be an unpleasant conversation. “Since John brought it up, I will go ahead and ask, though this isn’t the way I’d wished to handle this.” She placed her hands flat on her knees, to still their sudden shaking. “Max, I’ve had the papers for the annulment drawn up. It’s the best thing for both of us; our marriage has been over for years. All I need is your signature and—”

“No.” His gaze slid over her face, lingering on her lips. “A thousand times no.”

He stood, towering over her as he said in a voice so resolute that it seemed made of granite. “You were mine once, Sophia. According to the law, you’re still mine. You are still married to me and you still carry my name.”

“I was forced to, because of a scandal. One not of my making, either.”

“I know that now, though I didn’t when you’d left and you never told me a blasted thing and just—”

“Because you didn’t believe me innocent of the scandal. In fact, you blamed me just like everyone else.”

“I was young. Too young to even be married, as you well know. We should never have—” Her throat closed over a wave of emotion she’d thought long dead. “It was all a mistake.”

She swiped at her eyes with her napkin. “None of this matters. You’ve been gone so long that we barely know one another any more. It’s time for us to stop this madness. Just give me the annulment.” She leaned forward. “Please, Max. Let me live my life again and—”

“No. Whatever happened in the past is in the past. I have returned and I will do what I can to repair my name and your heart.” He leaned down, placed his hands on either side of her on the table and brought his face even with hers.

Sophia found herself looking directly into the eyes of the man who’d stolen her heart and then broken it all of those years ago.

He smiled, his firm mouth achingly close to her own. “Just know this: you are my wife and I want you back at my side, and in my arms. And I will stop at nothing to make it so.”