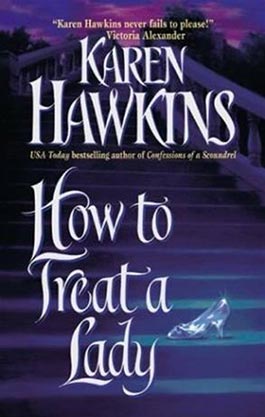 I don’t believe in love, that paltry, piddling emotion. Indeed, if love is ever going to find me, someone will first have to convince me it exists.

Chase St. John to his brother Devon, while riding through Hyde Park

To save her family from ruin, Harriet Ward invented a fiancé – a wealthy sea captain. But now the bank wants proof of the man’s existence. Just as Harriet despairs, fate drops a mysterious stranger into her arms, who she believes has no idea of his own identity… Does Harriet dare mislead the disturbingly handsome stranger. And if she  does, what will be the cost?

Chase St. John knows exactly who he is. While quitting London, Chase was waylaid by footpads and left for dead. Awakening in the care of Miss Harriet Ward, Chase is astonished when the tempting maid brazenly announces that he is her betrothed. Chase, ever a rogue, decides to play the part of adoring lover. But the price is rich, indeed, when it might mean losing his own heart.

"This romantic tale, with its humorous bent and entertaining storyline, will have readers laughing along with the characters."

~ The Road to Romance

"This was an enjoyable historical romance. The attraction between the two main characters was immediate and enjoyable to read about."

Harriet stared down at the unconscious man who lay in her bed and smoothed his hair. Thick and soft to the touch, the black waves slid through her fingers. He remained deeply asleep, his lashes on the crest of his cheeks, his lips slightly parted . . .

Harriet looked at his mouth. Heaven had never made such a perfect pair of lips.

Harriet wondered for just the barest moment what it would be like to kiss such lips. Heaven knew she’d never kissed such a beautiful man. She supposed she never would.

Harriet’s heart lowered. It was a pity there was no real Captain John Frankenham as she and her mother had been pretending in order to keep the bank from taking their home. But if there had been a real Captain Frankenham, she’d want him to look just like this man, with his bark hair and blue eyes.

She sighed, admonishing herself for her silliness.

Still, somehow her fingers found their way through the man’s hair once again, and then she traced the line of his brow to his cheek. His skin was warm beneath her fingertips, his skin shadowed by a day’s growth of facial hair.

If this really were the captain, and if they really were engaged as she’d told the bankers, she could kiss him with impunity. Kiss him because he was a man and because he was hers. The idea made her tingle. Why shouldn’t I kiss him?  She wondered. He’s asleep and no one would ever know . . . he wouldn’t even know. She blushed, but she also leaned forward and, after the smallest of hesitations, she pressed her lips to his.

For an instant, a warm shiver shot through her raising the fine hair on her arms and tightening her chest. It was as if she had stepped through a blast of hot air, her body absorbing the warmth.

Then something happened. The heat intensified, grew, made her lips tingle and her heart race. Harriet opened her eyes and found she was right. She had indeed stepped into a blast of heat – one that emanated from his blue, blue eyes.

The man was no longer asleep.

Just as in the story, Prince Charming had awakened with a kiss.