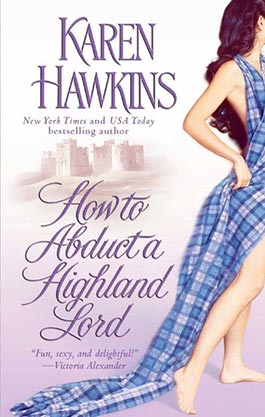 The MacLean Curse Series, Book I

It’s hardly the type of wedding Fiona MacLean dreamed of. No family, no guests, just a groom who’s been dragged – literally – to the altar. But if marriage to Black Jack Kincaid, the handsome wastrel she’d sworn never to see again, will avert a bloody war between their clans, so be it. Surely she can share his bed without losing her heart…

Known throughout Scotland and London as a wild rogue, Jack is accustomed to waking in dire situations, but…married? Long ago, he and Fiona reveled in a youthful passion. Now, the fiery, sensual lass is his once more. And though their marriage is in name only, Jack is determined to win her forever – body and soul…

"Fan Favorite Karen Hawkins has this series moving forward at a fast and furious pace of nonstop love and action."

"From page one I was intrigued with what the heroine would do next and how the hero would react . . . Ms. Hawkins did a wonderful job of turning a huge mess of a wedding into the marriage of dreams."

How to Abduct a Highland Lord is a winner. You can always count on Karen Hawkins for a truly satisfying read. Don't miss it.

“Our marriage will not stand,” Jack snapped, so angry that his hands shook. “It cannot be binding.”

Fiona’s jaw firmed, her eyes narrowing. “Oh, this marriage will stand; I made certain of that. Besides, if you try to end it, you’ll undo all the good I’ve done. With you married to me, then my brothers will halt their quest for blood and you and your family will be safe.”

“I know your brothers. It would take more than a mere marriage to keep them at bay.”

She dropped her gaze. “Perhaps.”

“Perhaps? What do you mean?”

She shrugged and began to turn away.

He grabbed her arm and yanked her back around. “Explain yourself.”

“No. Not while you’re holding me so.”

“You bloody witch,” he snapped. In two short steps, he had her trapped between his body and the wall, the warmth of her skin seeping through her pelisse. For some reason, that only angered him more. “Whatever it is that you’ve done, you will undo. I will not be married. Not now, not ever!” He lowered his face until their eyes were even. “I will not give up my freedom, and I don’t give a damn about Callum or my brothers or anyone else.”

There was a moment of shocked silence. Fiona might pretend to be brave, but he could see from the way her lips trembled and her chest rose and fell with her short breaths that she was frightened.

“I will not undo anything,” she said in a low, breathy voice, though her eyes blazed in fury. “We are married. We will stay that way. I am sorry, but there is nothing you can do about it.”