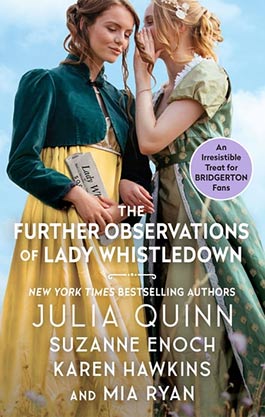 Karen Hawkins captivates with an enduring story of a handsome rogue whose lifelong friendship -- and his heart -- are tested when the lovely lady in question sets her cap for someone else.

"Friends-becoming-lovers is a favorite storyline of mine and this one is beautifully done. The affection and easy relationship between the two segues in a nice and believable fashion into romantic love ..."

"Wickedly humorous and intriguing characters will enrapture the reader in this tale of affection and loyalty, causing the reader to yearn for more."

~ The Road to Romance

"Karen Hawkins delivers a standout story with "Two Hearts," featuring offbeat Liza Pritchard and her best friend, Sir Royce Pemberley. Although Royce has thought of Liza as a confidante for 20 years, he sees another side to this strong woman when she intends to settle down. It's rare to see male and female friendships in any romance, and even rarer in Regencies thanks to the strict times, but Hawkins pens a convincing bond for the duo, which deepens satisfyingly into love. Bravo!"

Royce rubbed his chin. The words would not come, and he cursed himself for prevaricating. He apparently could converse with Liza – his best friend in the world – on a number of inappropriate topics (Had he really confided to her about the blonde actress? How else could Liza have known?), but couldn’t find the words to ask her about a man rumored to be on the verge of proposing to her.

It was silly, really. This was Liza, for God’s sake. Liza who knew him better than anyone else. Liza who laughed at his faults and teased him when he was low and always, always understood him.

Yet here he was, stammering like a tongue-tied boy of six. He wracked his brains trying to think of a subtle way to lead the conversation to this Lord Durham. Was Liza really serious about accepting an offer of marriage from an unknown lord? Well, unknown to Royce, anyway.

It was imperative that he discover what affection, if any, she held for the man. He cleared his throat. “Meg and I had an interesting conversation this morning.”

Liza was busy trying to fix the bent ostrich feather on her hat, but she managed to murmur, “Did you?”

Liza’s hands stilled, an instant reaction in her green eyes. But she gave a quick shrug, as if to reject an unwanted thought. “Is Meg matchmaking yet again? I can’t imagine why she persists in doing so.”

It was very promising that Liza didn’t immediately claim or deny any knowledge of Lord Durham. Perhaps it was all Meg’s imagination. Yes, of course it was all Meg’s doing – it always way. Relief poured through him and he grinned. “You know my sister. Her penchant for matchmaking knows no bounds. Perhaps we should flee London to protect ourselves.”

“That would be easier for me than you, I’m afraid. I can always change my name and hire myself out as a governess, but what would you do? You’ve no skills at all.”

“Nonsense,” he scoffed. “I could find a career.”

Her eyes twinkled. “You’ve never been to sea a day in your life. I daresay you don’t know starboard from port.”

“I know my port well enough, thank you,” he said, assuming a huffy demeanor. “I drink a glass every evening before bed.”

“Goodness! I take it all back, then. Obviously you would make an excellent sea captain.”

Royce chuckled. “Always ready to put me in my place, aren’t you?”

“Only when you need it.” Liza’s smile met his own. “I know your sister means well, but it is a pity we are forced to examine such extreme efforts just to get away from her matchmaking. She really should leave us to settle our own lives as we see fit.”

“She worries about us. And you are like a sister to her.” Oddly, he felt the urge to add something more. “Liza, I cannot speak for Meg, though I’m sure she feels as I do: I am always here for you. I hope you know that.”

Her gaze flew to his. The silence deepened and intensified, and a sort of unease arose between them, something . . . different. Something compelling. Something—

She flushed and looked away, lifting a corner of the leather curtain. “They say it’s been so cold for so long that the Thames is a solid block of ice.”

He hesitated to change the subject for he suddenly realized that Meg, for all of her meddling ways, had been right about one thing – Liza seemed vulnerable for some reason. Uncertain, even, which was highly unusual.

Liza dropped the curtain. “I daresay there will be ice skating on the river if it stays this cold.” She tugged the collar of her pelisse closer and shivered. “It’s bitter outside.”

He nodded absently, his gaze flickering over her graceful hands, noting how the bright colors of her clothing offset the creaminess of her skin. Sometime between her seventeenth and her twenty-fourth or –fifth birthdays, she’d developed her own peculiar sort of beauty. One that had little to do with her features, and had more to do with the way she moved.

Royce wondered if other men noticed the same things about Liza that he did. The idea made him shift restlessly in his seat. Damn it, he hated to think of someone harming Liza. She was special, different from all other women, and far more delicate in her own way. Perhaps it would be better if he just took the bull by the horns and asked the question that had been hovering on his lips for the past half hour. “Liza, tell me about this Lord Durham.”

Hot color flooded her cheeks and she uttered “Damnation!” in a most unladylike way.

Royce’s heart lurched. Bloody hell, something was going on with that cursed fellow.

Liza sent him a sour look. “I suppose you read Lady Whistledown this morning. I was never so mortified as when she mentioned that I was older than Lord Durham, as if that matters—”

“Older? Good God, how young is this man?”

She blinked. “Then you didn’t read Lady Whistledown’s column?”

“Meg burned it before I had the chance.”

“Oh. I felt like burning it myself. I’m only four years older than Lord Durham, which isn’t that much. I don’t know why anyone would make a fuss over such thing.”

“Why? What do you mean, why? Meg is like a sister to you. Therefore, I have every right to ask you such questions.”

“Royce, in the fifteen years we’ve been friends—”

The carriage rumbled to a halt. They must have reached her lodgings, but he was too irritated to pay any heed. “Tell me about this Durham fellow. Who is he and why haven’t we met him yet? Is there something wrong with him that you haven’t bothered to introduce him to either Meg or myself?”

Liza’s color was high as she said in a cool tone, “Nothing’s wrong with him; it’s just none of your business. I’m well able to make my own decisions regarding matrimony and everything else to do with my own life, thank you.”

“How can you say such a thing?” He captured one of her hands and held it tightly. “Liza, I’ve been your best friend for twenty-one years. Surely it’s natural for me to ask you about your beaux. Damn it, I care.”

She looked down at where he held her hand, a strange expression passing over her face as she lifted her gaze to his. “Do you really?”

He cared. Of course he did. But there was something in the way she said those three words that made him wonder if she meant something else when she used the word ‘care’. Something he was totally unprepared for. Before he could gather his thoughts, a small smile touched her lips and she tugged her hand free. “I will come to no harm at Lord Durham’s hands. Lady Birlington introduced us and she speaks very highly of him.”

The door opened and a footman pulled down the steps before standing to one side, though still well within hearing.

Royce leaned forward and growled in a low voice, “Your godmother speaks very highly of Lord Dosslewhithe, too, and he talks with his mouth full and has had fourteen illegitimate children.”

“I forgot about him.”

“So, she usually has excellent taste in finding men of character and this time I believe her to be right.”

But she slipped out of the carriage and took the two steps to the sidewalk.

Heart pounding with an odd fury that was totally unlike him, Royce followed. He grabbed her elbow and turning her to face him, ignoring the shocked look from the footman. “Blast it, Liza! Tell me you aren’t serious about this Lord Durham.”