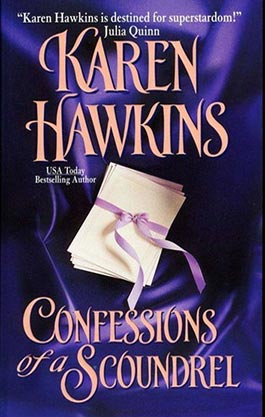 Legend says that whomever possesses the St. John talisman ring will find their one true love. Now that the ring rests in the pocket of renowned scoundrel Brandon St. John, the dashing rake must decide whether it is a blessing…or a curse.

Never has the irresistible rogue, Brandon St. John, pursued a woman with more fervor—but his ardent suit of Lady Verena Westforth has a different purpose. The delectable blond lovely is indeed enticing, but Brandon suspects her of hiding a valuable missive that he has sworn to recover. With a sensuous kiss and a passionate caress he intends to lower Verena’s guard… and then discover where she’s hidden “the goods.”

Without the missive, Verena stands to lose the one thing dearest to her heart. And now an extraordinary man has entered her life…at the worst possible time! Vulnerable though she may be, Verena vows she will not be just another of Brandon’s “conquests,” even as she aches to melt in his arms. But is he a needed friend or a foe in alluring disguise…and will she be able to prove to him that love is their true destiny?

"(Confessions of a Scoundrel is) . . . wonderful, engaging . . . At almost every step, the author appears to be taking the reader in one expected direction after another, only to veer off down a completely different garden path. Not only is it refreshing to be surprised, but the unpredictable conduct, particularly from Verena, goes a long way towards building a clearer picture of her character than all the typical romance heroine behavior in the world."

"A new and welcomed tale of the St. John brothers, Confessions of a Scoundrel will charm and delight readers with its clever characters, including the quirkiest servants ever to serve. Once again, Ms. Hawkins has penned a thoroughly entertaining novel."

"With plenty of sexual tension and humor (Verena's light-fingered butler is a hoot!), readers will eagerly await the next book of the St. John series!"

“Herberts!” came a feminine voice from the stairs.

Brandon followed the butler’s gaze, a half smile already carefully in place. This should be relatively easy. All he had to do was convince Lady Westforth with whatever sum it took that it was her best interest to leave his brother, Chase, alone for a few weeks. His interest would wane – it always did. And then the spell this little charmer had cast would be broken.

Brandon’s gaze fell upon the woman now standing on the bottom stair. His smile froze, and then disappeared all together. Despite the reports he’d gotten from his brother, Lady Westforth wasn’t beautiful at all. Her bottom lip was too short, her chin far too determined, her figure not the thin, willowy type society favored. She was blonde, her hair the color of ripened wheat, but the strands were thick with no sign of the curl so favored by the women of the ton. All in all, she was merely passable.

That was a relief. Chase could not possibly fancy himself in love with this woman. Perhaps this was a fool’s errand and there was no need to even—

She turned her head and her questioning gaze met his.

Her eyes were the deepest violet, fringed with thick, lush lashes. As she took the final stair, the light from the window crossed her face and he realized that her skin was a creamy white freshly touched with pink. But it was her sudden smile that stole his breath. “Lord St. John, how kind of you to visit.”

He couldn’t explain what it was, but when she looked at him like that, humor lighting her gaze, her full lips curved just so, a deep thrum of awareness gripped him and his entire body responded as if, in some way, he recognized her. Knew her . . . intimately.

Which was silly, of course. He’d never seen her before, and hoped to never see her again. Still, he knew he could no longer pretend she was not a danger. Chase was in far deeper trouble than any of them had realized.

There was danger in the intelligence that lit her eyes, as if she already knew why Brandon was here. Danger, too, in the way she regarded him so coolly, as if she was ready at a second’s notice to send him on his way.

But he would not be so easily dismissed. He tightened his jaw and bowed. “Lady Westforth. I hope I’m not intruding.”

“Of course not.” She came forward. “If you’re looking for your brother, he’s not here.”

That she would so brazenly admit that his brother was often behind her doors seemed impertinent and made Brandon’s blood roil. “I know. I wished to see you without his presence.”

Her gaze narrowed, and a flicker of something crossed her face – irritation? Pride? Perhaps both. “Lady Westforth, if we could speak in private? I think you’ll find it worth your time.”

For an instant, he thought she’d turn him away then, but instead, she turned to her gawking butler. “Herberts, take his lordship’s coat to the kitchen and dry it before the fire.”

As soon as the butler had shuffled off, she turned back to Brandon, collected him with her gaze and flicked her hand toward a set of double doors. “This way, if you please.”

Brandon followed her, fuming even as he forced forcing himself not to notice the graceful sway of her full hips under her silk gown. He’d only been in this woman’s presence a mere moment and he had the impression that she’d already taken control. This was not how this meeting was supposed to go.

Chase, what have you gotten yourself into? Yet as soon as he had the thought, another, deeper part of his mind answered, A tempting trap is it, too. With but one easy step, I could fall into it myself and never look back.