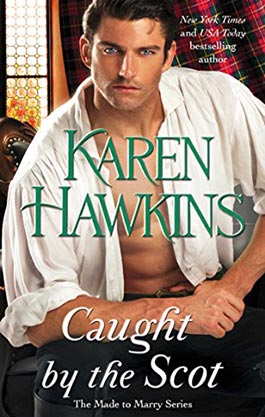 Dashing Scottish privateer Conner Douglas must marry a respectable, well-born woman—and soon, if he wants to secure his rightful inheritance. Determined to still explore the high seas as well as his mistresses’ beds, he aims to find a pliable wife who’ll turn a blind eye to his antics. And he knows just the woman—childhood friend and mousy spinster Miss Theodora Cumberbatch-Snowe.

Unbeknownst to Conner, meek and plain Theodora has been hopelessly in love with him for years. But unwilling to wait forever for what will never happen, Theodora plans to wed a kind—if unexciting—local landowner, leaving behind the wild Highlander of her dreams.

Yet Conner refuses to let his perfect wife get away. He chases her to Gretna Green and is shocked to discover the real Theodora is an ardent and wildly sensual woman. Soon he realizes his passion to win her has nothing to do with securing his inheritance and everything to do with earning the love of the unforgettable woman who has vowed to leave him in her past forever. But have his wandering ways chased the woman he loves away for good? Or can Conner convince Theodora to give him one last chance before she marries the wrong man?

Meet Conner and his brothers in this excerpt from @SimonAudio:

"Rich with action, awash in emotion, and seasoned with the perfect amount of humor, CAUGHT BY THE SCOT is a decadent, enjoyable, fast-paced read."

Theodora bolted to her feet before she could take another breath, wincing as her sore ankle accepted the pressure of standing even as her gaze locked on the man outside. She set her glass down without noticing that she missed the small table and it went tumbling to the rug as she hobbled toward the window. Blast it, what is Conner Douglas doing here?

It had to be an unfortunate coincidence as her own parents didn’t yet know she was eloping, and wouldn’t until they returned from town next week and found the letter she’d left. Whatever Conner's reason for coming to this inn, she had no wish to speak him, not now or ever.

He handed his horse to a postboy and strode toward the inn door, walking with such purpose that her heart thundered in warning. She looked frantically around the small parlor to find a place to hide, but the sound of his deep, lilting voice in the hallway put that faint hope to rest.

She’d have to face him. Cursing feverishly, she limped to the mirror, horrified to see the bloodied scrape on her jaw and the way her thick brown hair, only partially dry, had curled in a horrifyingly Medusa-like manner. Good God, where is a comb when one needs it?

Before she could do more than pat her curls one quick time, the door flew open and Conner strode into the parlor escorted by the maid, a young lass with red hair who couldn’t seem to stop staring at the Scotsman, her eyes full of longing.

Theodora couldn’t blame the poor girl. The striking Douglas looks were hard to resist. Broad-shouldered, startlingly handsome with dark brown hair that curled about his neck, a piercing light blue gaze that changed with his many moods, his smile as blinding and wild as a pirate’s, a career he was often accused of following, he was the stuff of fairytales and dreams.

His gaze flickered over her now, taking in her wet, muddied gown, her bedraggled hair, and finally finding the scrape on her jaw. His gaze, at first so bright on seeing her, turned icy. “If that fool has laid one finger on you—”

“Don’t be ridiculous! We had an accident.” Her voice was sharper than she meant it to be and she took a second to calm herself, realizing with a sinking stomach that he did indeed know why she was here. But how?

“The wheel on our curricle broke, and I was thrown out.”

"Bloody hell!" Concern darkened his eyes. “Are you injured elsewhere?”

She thought of her knee and ankle. “No.”

"Och, lass, what has that fool done to you?" The soft lilt of his voice made her throat tighten and she shivered, although not from the cold, but from the warmth of his tone.

“You’re shivering." He stalked across the room and stopped before her. He tugged off his overcoat, and swung it about her shoulders, instantly enveloping her in warm wool and the heady scent of his sandalwood cologne.

She tried to push the coat off. “Please, I don’t—”

“Pssht.” He tugged it back in place. “Wear the damned thing; you’re shaking from the cold.”

She didn’t have the energy to argue, so she pulled the coat more snuggly about her, and was instantly warmer. While the long woolen coat only reached Conner’s calves, it pooled at her feet.

The soothing warm weight comforted her and as her shield of irritation eased, the stressful events of the morning hit with fresh vigor. Theodora had to swallow the desire to both burst into tears and throw her arms about his neck.

To save herself from doing either, she turned to the maid. It took several hard gulps, but Theodora managed to say in a voice that only trembled a little, “We would like some tea, please.”

The maid struggled to rip her gaze from Conner, who was oblivious as usual to the attention being paid him. With a lingering sigh, the maid bobbed a curtsey. “Yes, miss. We’ve lemon cakes fresh from town just this morning. Shall I bring some for the squire, too?” The maid sent a secretive glance at Conner to see if he were surprised to hear that Theodora was not at the inn alone.

Thea wet her bottom lip nervously. Why is he so upset? He wouldn’t care if I eloped, I’m sure of it. She turned to the maid. “The squire is away seeing to the curricle. If he wants tea when he returns, we'll ask for it then.”

The maid looked disappointed at Theodora’s aplomb, but bobbed a curtsey and, with a last longing gaze at Conner, left.

You poor girl, Theodora thought. He looks like every hero you’ve ever imagined, doesn’t he?

And yet he’s far, far from that.