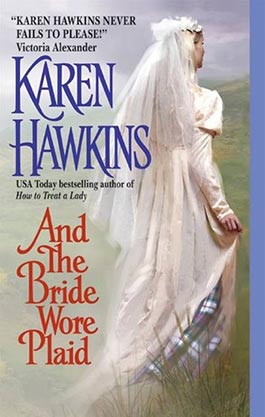 “My brother, Devon, left for Scotland in an effort to escape a foretold marriage. I only hope he has a very fast horse. He’ll need one.”

Sara Montrose, the Countess of Bridgeton, to her friend, Sophia Hampton, Viscountess Easterly, while playing billiards at Chiswick Manor.

Once upon a time, a beautiful woman locked away her heart from all who might try to enter…

Katherine Macdonald once tasted the bitter poison of a broken heart. To protect herself, Kat put her feelings into a deep slumber. Now she lives in a cottage in a mystical wood where, assisted by seven hulking Scotsmen, she makes stained glad of magical beauty, happy in her isolation until…

One day, a charming prince with black hair and deep blue eyes came riding into the mist-shrouded forest…

Devon St. John has found himself in possession of the St. John talisman ring that curses the holder by clasping a wedding band on his finger when he least expects it. Devon vows that he will never give up his beloved freedom – even when an impulsive kiss from a beautiful Scotswoman with red gold hair casts a tantalizing spell…

And so, the tale begins…

"Hawkins works her special magic in bringing her unlikely and unforgettable characters together."

"Hawkins knows how to write a fun tale with interesting characters. I can't wait to see what befalls the next brother!"

Devon patted the mattress. “This is a wonderful bed. The mattress is firm, the sheets sweet-smelling. Perhaps I should just stay here.”

Catherine’s gaze jerked back to his face, and she plopped her hands on her hips. “Nay, you will not.”

There it was, the faintest hint of a Scottish brogue. Apparently when my lady’s maid was irked, her accent began to show. Devon hid a smile and shrugged. “We’ll see.”

“We won’t see anything. You will leave now.”

He looked down at his lap, barely hidden from sight by the thin sheet. “Now?”

Her gaze followed his to where his obvious reaction was visible against the folds. Her cheeks heated, a lush pink color beneath the creamy white. “Nay,” she said hastily, “not now. But as soon as I’ve left. Then you can put on your clothes and be on your way.”

He was not going to leave without at least a kiss – or something more – to give him the strength to fight off whatever enticements the blasted talisman ring had in store. He glanced down at the bandbox she’d been peering into. “What are you looking for?”

“A ch-“ She snapped her lips closed, glaring at him as if he’d committed a sin of some sort. “None of your business.” She bent down and plunked the lid back on the bandbox. Then she picked it up and returned it to the stuffed wardrobe, slamming the doors closed. “I’ll leave you to dress and then I’ll return and finish what I was doing.”

“Don’t leave yet.” He patted the bed beside him, watching her from beneath his lashes. “Stay and talk a bit.”

One brow raised in skeptical disbelief. “Talk?” Her gaze dropped pointedly to his lap. “That’s not what you appear to be wanting.”

He choked on an unexpected laugh. She was a brazen one with a wit to match. It was a pity he had so little time, for it would have been wonderful to luxuriate in that deliciously decadent body of hers. As it was, he was forced to immediate action.

Devon met her gaze directly. “I wish I had more time to spend here at Kilkairn.”

He ignored the satisfied that threaded her voice. “I’ve business to attend to for my brother, so I must leave in three weeks. Which is a great, sad pity.” He peered at her from beneath his lashes and waited.

She shifted from one foot to the other, curiosity rampant in her gaze. After a moment, she asked in a rush as if the words were forced from her, “Why is it a pity?”

“Because if it were not for that wretched fact, I would stay here and spend days, weeks, slowly seducing you, teasing and tormenting away your frowns until you had nothing left but ecstatic gasps and contented sighs.”

If she’d colored before, it was nothing compared to the blaze of pink that heated her cheeks now.

“More that anything in the world, I want to kiss you. Right now.” Devon leaned forward.  “May I?"