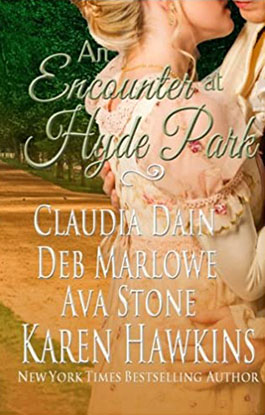 Uninterested in domestic bliss, Lady Charlotte treasures her freedom as a wealthy, unmarried lady living with her best friend, the spritely Duchess of Roxburghe, and assisting in that lady's energetic matchmaking endeavors. But now - shockingly - the duchess has turned her sharp ambitions on none other than Lady Charlotte herself.

Charlotte's having none of it. She likes her life and her freedom, but when an old love from her past reappears, the mysterious and dark Angus Reeves, Lord MacThune, and attempts to woo her with an exciting, thrilling kiss, Charlotte begins to wonder if perhaps - just perhaps - 'domestic bliss' might mean something other than what she originally thought . .

He grimaced around his cheroot. The cream of England’s society had behaved like fishmongers trying to sell their wares. Fortunately for Angus, he’d spotted an escape route behind a large potted fern and had been able to squeeze behind it and slip away from the madness. Now, thirty minutes later and hidden in the gardens off the terrace, protected from the world by the still-chilly May weather that would keep the rest of the guests inside, he was more than ready to leave. Mother had better appreciate this effort. All he wanted was to return to the peacefulness of his uncle’s townhouse. Unfortunately, in order to do so, he’d have to pass by one of the many windows of the Roxburghe ballroom and risk being seen, which wouldn’t do.

His mother must believe he’d stayed for the entire ball, had danced with dozens of women, and had enjoyed himself immensely. So he was stuck, at least for a while. When the ball came to a close, he’d re-enter the ballroom, dance with the least annoying woman he found, make his bow to his hostess, and then leave.

Meanwhile, he was quite content here in the garden, surrounded by quiet and the damp of a chilly night that made cheroot smoking all the more pleasurable. He leaned against a stone pillar and made smoke rings, watching as one expanded to catch the moon.

A door opened, the music growing suddenly loud before the panel clicked shut. Blast it! Was I seen? Angus quickly moved between two shrubs, well out of sight. The approaching rustle of silk told him the guest was indeed a woman.

An unfriendly breeze stirred the trees overhead and he heard a murmured complaint followed by a ‘brrrrr!’ as the woman moved closer. To his relief, she hurried past his hiding place, moving as if she were on a mission, her attention elsewhere.

It was much too dark to move in such a hasty fashion as the flagstones were damp and slick. Irritated, Angus flicked his cheroot to the ground and stomped it out, and then stepped forward. “Careful. The st—”

“AH!” Obviously startled by his sudden appearance, the lady lurched to one side of the pathway, her slippered foot tangling in her voluminous skirts, which sent her headfirst toward the fountain, hands outstretched.

Angus leapt forward and caught the lady about the waist just as the palms of her outstretched hands touched the fountain’s surface.

For the longest moment, they stood thus, frozen like the stone statuary that shadowed them, the water’s rush hiding their belabored breathing, the faint mist of the fountain settling upon their clothing like tiny diamonds.

As the moment sank into time, Angus became aware of two things. First, over the scents from the garden of damp ground and English roses, her perfume tickled his nose, a faint mix of jasmine and spicy orange, as delicious as it was teasing. Second, the lady’s rump, pleasingly plump and warm, pressed snuggly against his groin, the sensation instantly arousing.

The woman must have felt it at the same time, for she gasped. “Your—that’s—Oh my!” She pushed at his arms with damp hands.

“Cease, my lady! If I release you now, we will both fall into the water.” Her struggles halted and Angus, tightening his hold on her just long enough to pull her away from the fountain, set her firmly on her feet. Once there, he released her, the cold air rushing in and chilling him head to toe through his now-damp clothes.

“My gown is ruined!” She brushed at her silk skirts, her head bent, the moon haloing her hair and glinting off the rim of her spectacles. “That was–and then you were—and your hands were on my—Oh dear!”

Her breathless voice condemned him in some way. Oddly bereft in the cold after holding such a warm, soft form against his own, he said in a harsh voice, “If you hadn’t been running in the dark in such a thoughtless fashion, there would have been no need for either of us to be in this position.”

“If you hadn’t leapt from the shrubs and startled me, I wouldn’t have fallen at all!” She flamed up at him, and he was rewarded with his first view of her face even as her chin firmed in a mulish line.

His chest contracted, his breath caught in his throat. He knew her, knew the curve of her cheek, knew the slant of her smile, knew the dimple on her left cheek that peeped out when she laughed. “Charlotte?”

She blinked up at him, her eyes wide behind her spectacles and he found himself holding his breath. Slowly, recognition settled onto her face. “Angus?”