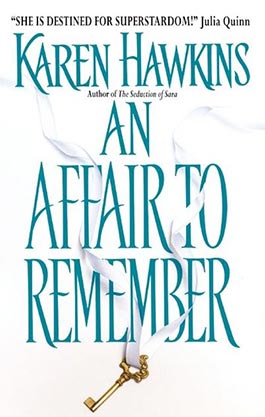 “The men of the St. John family are outrageously handsome and possess far too much wealth. It is enough to make one ill.”

Saddled with five unruly orphans, the Earl of Greyley, Anthony Elliot, is at his wits’ end. Unfortunately, the only person willing to deal with the adorable little terrors is Anna Thraxton, governess extraordinaire – and the one woman Anthony can’t abide. She’s too outspoken, too opinionated, and far too beautiful for his peace of mind. A woman should be meek and mild – words that perfectly describe his prospective bride, not the flame-haired temptress who haunts his dreams.

Anna knew this job would be trouble the moment she set foot in the door – but it’s Anthony who’s the problem, not the children! He’s too arrogant, too sure of himself, and far, far too wonderfully big and masculine. The young girl he’s courting will never be able to handle him, so someone clearly needs to teach Anthony a few things about women. But when lectures turn to kisses, igniting a passion they can’t ignore, how will they resolve the battle between honor and their hearts?

"AN AFFAIR TO REMEMBER is an engaging Regency romance that readers will delight in!"

"A quintet of delightful children, well-drawn secondary characters, and a pair of most appealing protagonists add to this charming, romantic, and nicely written tale."

"(An Affair to Remember) is elevated above the rest by its beautifully told romance between two memorable characters."

Anthony gave an impatient flick of his hand. “It doesn’t matter who I am – I need you, Miss Thraxton. And I’m willing to pay.”

“You don’t have enough money to employ me.”

“Everyone has a price.”

He allowed his disbelief to show in a lifted eyebrow, fighting to contain his irritation at having to beg for the employment of a mere servant.

She made a disgusted sound. “You are the most insufferable, pompous, irritating man I’ve ever met.”

“And you, Miss Thraxton, are the most infuriating, maddening, annoying woman in all of England. But I’m willing to overlooking that unfortunate fact because you’re also supposedly the best governess to be had. And make no mistake,” he growled, stalking closer until he stood not a foot in front of her, “I intend to have you. Now cease this foolishness and tell me your requirements.” Good Lord, am I going to have to battle her every step of the way?

Her chin lifted to an even more mutinous angle, her mouth thin with anger. “I was willing to assist you in locating a suitable replacement, but if you cannot at least pretend to be pleasant, then I have nothing more to say.”

“By God, I haven’t come to London for his health. I came to hire you and hire you, I shall.”

“I’ve heard more than I wanted to,” she said. “Please leave before I call the butler.”

Anthony closed the narrow space between them, his body all but touching hers. “Then call him.”

“You wouldn’t dare,” she said, hissing the words through her teeth.

Her chin lifted and, before Anthony could comprehend what she was about, she opened her mouth and called loudly, “Hawk – “

Anthony grabbed her. His only thought was to keep her from making such a racket that she brought the entire household into the sitting room. But the frustrating events of the morning and the sudden, enthralling feel of her full breasts pressed against his chest cracked the veneer of Anthony’s calm logic and released a torrent of pent-up emotions, emotions that flared to life all to quickly around the fiery-headed woman he now held in his arms.

Thus it was that Anthony Elliot, the always proper ninth Earl of Greyley, did something he never did. He lost control of his carefully contained anger and kissed the woman he wanted to hire as governess.