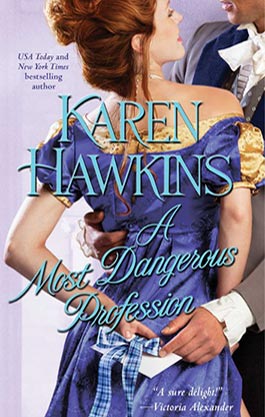 The third book in the Hurst Amulet Series

Rakish Robert Hurst must find the ancient onyx box his brother needs to win his freedom from the sulfi holding him captive. But Robert's not the only one hot on the trail of the ancient box -- so is beautiful and treacherous Moira MacAllister, the woman who - years before - tricked Robert into marriage and then vanished without a trace. Now she's back and desperate to get her hands on both the box and the one man she's always loved, but was forced to leave.

Can she win his trust once again? Can he resist her charms one more time? Only time, and love, will tell!

"If you're looking for a guaranteed-good-time-read, A Most Dangerous Profession is the book for you."

"Ms. Hawkins delivers one heck of a ride in A MOST DANGEROUS PROFESSION, and I did not want to put Moira and Robert’s book down."

"Complex characters and plot, a parallel storyline, a quest, two star-crossed lovers and fast pacing make this a most delightful read."

Robert Hurst leaned forward, his broad form blocking the light. “You haven’t answered; was he blackmailing you, too?”

The words were gently spoken and they filled Moira’s heart with such longing that tears actually filled her eyes. If only she could tell him, explain things, lean on him, trust him. But she already knew the cost of trust.

She pulled her wrist from his grasp, turning away so she could quickly swipe the tears from her eyes. “Don’t be foolish. What could that horrible man possibly hold over my head? I don’t know anything about your precious onyx box. If I did, do you think I’d be here?”

A flicker of something crossed Robert's face – was it disappointment? He shrugged. “You must have thought it might be here, or you’d have never come.”

“I'm sorry, Mr. Hurst, but I haven't the faintest idea what you’re talking about. George Aniston hired me to fetch something for him and I did it. I had no idea he was blackmailing your sister-in-law. I never asked and he never mentioned it.”

His face hardened. “No, it’s not fine, Mrs. MacJames.” He almost spit the name.

“You don’t like it? MacJames is a time honored name that—“

“—is completely false. I know your real name, which you've apparently forgotten. Your real name is Moira MacAllister—” He paused and then added in a voice sharp with unspoken anger. “—Hurst.”