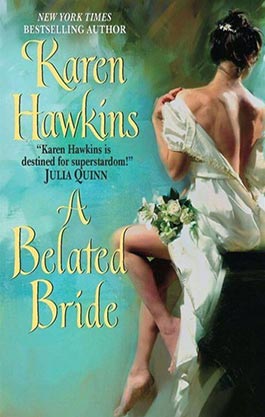 The last man Arabella Hadley ever wishes to see again is Lucien Devereaux, the handsome, dissolute Duke of Wexford who broke her innocent heart years ago and disappeared to London. So when she finds an unconscious man on her deserted country road and sees that it’s Lucien, she’s tempted to leave him there. But even more appalling than his presence is the brazen kiss he plants on her shocked lips – and her response! So it would be absolutely insane to take him home to recover…wouldn’t it?

Except for one small thing…

Lucien dares not reveal why he’s returned to his country estate – or why he abandoned the strong-willed beauty years ago. Especially since Arabella clearly has secrets of her own. But when her scheming, marriage minded aunts successfully compromise them, the two are forced to  become man and wife. Which makes it ever harder for Lucien and Arabella to battle the unbelievable passion that consumes them still…

"A Belated Bride is a clever, engrossing romance with a lot to offer."

"Told with humor and wit, this is an entertaining tale of romance rekindled against a backdrop of danger and intrigue. Author Karen Hawkins is a budding Julia Quinn, master of the mad romp."

"I'm really enjoying Karen Hawkins, she's a favorite of mine now and this is turning into a pretty good Regency series. I highly recommend A Belated Bride!"

“I don’t care what anyone thinks,” Arabella declared.

“But I do,” Lucien ground out, his jaw set and hard.

Arabella had to fight an overwhelming desire to kiss away the bitter turn of his lips. Shocked at her thoughts, she turned to fasten down the curtain that flapped against the window and said breezily, “Oh, I’ve been ruined before. As painful as it was, I lived through it.”

“You should not suffer because of me.” Lucien’s warm voice sounded in her ear. “Never again, Bella mia. Never again.”

She turned and found herself drowning in his sea-green eyes. She knew she should speak, say something cutting. After all, this man had taken her heart and discarded her as if she were of no more importance than a wrinkled cravat. His heartless actions had hurt her with a pain that had been as soul-deep as it had been long in duration. She could still feel the sting of his rejection.

At the time, she had believed she would never forgive him. She had dreamed of the day when she would have the chance to face him. But the words she had imagined herself saying for so long fled, and all she could do was stare at him; at his incredible eyes, the smooth golden line of his face, the sensual shape of his mouth.

“So beautiful,” Lucien murmured. As if sensing her longing, he lifted a hand to her cheek. His eyes glistened with hunger as he lowered his mouth to hers.

Arabella was lost at the first touch of his lips. Once again she was sixteen, pledging her love to the only man who had lifted her senses to such heights. Waves of desire raced through her, stealing her breath and tangling her in feelings she had no strength to deny.

A slow heat began to build inside her. She gripped him closer, and felt his groan rumble deep in his chest.

Abruptly, Lucien’s mouth slipped away and he fell back against the seat.

She stared down at him, slowly realizing what had happened; Lucien Devereaux, the dashing and dangerous Duke of Wexford, had fainted.